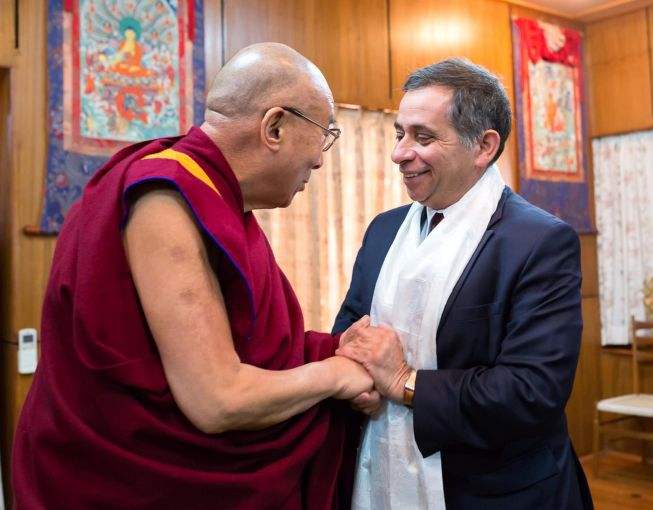 Then-President of the European Economic and Social Committee (EESC), Henri Malosse, during an audience with His Holiness the Dalai Lama in Dharamshala, India on 12 March 2014. He was accompanied by a delegation of EESC members.

Mr Henri Malosse, former President of European Economic and Social Committee (EESC) of the European Union organised a workshop on His Holiness the Dalai Lama’s thoughts on independence, ecology and his admiration of the European Union. The event was held through a webinar on 7 October.

Mr Tashi Phuntsok, Representative of His Holiness Dalai Lama in Brussels was the key speaker at the workshop.

After a brief introduction by Mr. Malosse, the workshop was followed by the screening of 16-minute long video “I Admire the Spirit of the European Union- H.H. the Dalai Lama”. The film was produced by the TTV of DIIR in collaboration with the Office of Tibet, Brussels. The documentary illustrates His Holiness’s admiration for the spirit of the EU and his association and interaction with it for over three decades.

Representative Phuntsok spoke in detail to illustrate His Holiness’ profound thoughts on one-humanity and one-planet.

“The ongoing pandemic has brought this reality to the fore as never before. His Holiness’ unflinching support for ecology is well known. Current global warming is in front of the world. The importance of Tibet as the water tower of Asia is linked to the fate of all the riverine countries in Asia. Not to speak its significance to the formation of the monsoon wind system. His Holiness’ admiration for the spirit of the European Union is widely known. The video illustrates it amply,” he noted.

Representative further noted the basic tenets of freedom, rule of law, democracy as a basic charm of the EU. Learning from past immeasurable sufferings caused by battles and wars, it has chosen the path of discussion, debate and dialogue to reach an amicable decision for the common benefit of its 500 million citizens. It is not unlike the Tibetan Middle Way approach.

The workshop was organised by the french political movement called Generation Ecologie. Its President is Ms Delphine Batho, Member of the French Parliament. Mr Malosse is responsible for préparing a position Paper about the party’s vision in Europe and international matters.

Mr Malosse, French politician, is an old friend of Tibet. The Office of Tibet is honoured to have him in regular contact. As President of EESC, he led an official delegation to CTA, Dharamsala in 2014. For which he was blacklisted by China.