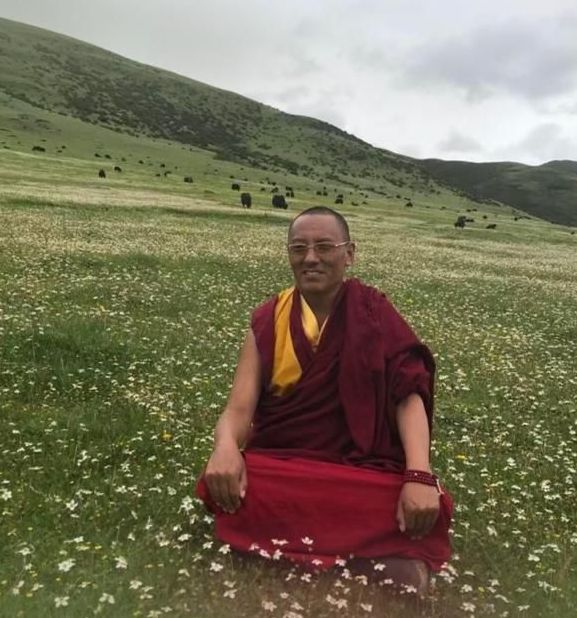 The public security bureau of the Sichuan and Karze (Ch: Ganzi) Tibetan Autonomous Prefecture arrested Geshe Tenzin Pelsang, also known as Tenga, on 2 April 2012 at a meeting in Drakgo (Luhuo) without providing any explanation for the arrest. During the next 10 months, his whereabouts and well-being remained unknown.

On trumped-up charges of political crimes, the Chinese authorities in Chengdu sentenced four Tibetan monks including Geshe Tenga, two Tibetan monk teachers, and a rinpoche of the Drakgo Monastery to six years in prison. Another monk was sentenced to five years in prison and 36 Tibetans, both laymen and monks, were handed prison terms ranging from one to two years for alleged political crimes, according to the source.

Tenga was at the time the Drakgo Monastery’s senior treasurer, and had no health issues. During his imprisonment, “he was subjected to severe and repeated torture and beatings by the Chinese police as a result of which he became very ill after three years of imprisonment”, the source said. He was unable to receive timely treatment from doctors in the following years, and the lack of basic necessities such as food and clothing deteriorated his poor health which led to a series of unfortunate circumstances.

In April 2018, he was released from prison after completing his sentence. “His conditions were so severe that he needed his family members’ assistance even in doing his business or walking around in the house”, the source said. Furthermore, he was prohibited from visiting his monastery and meeting prominent individuals. His home was intruded every day by the authorities ordering him what things he should and shouldn’t do, causing him physical and mental problems.

During that time, his fellow monks and family members were gravely concerned about his health. Accordingly, Drakgo monastery’s doctors treated him as much as possible. For a time, he recovered to some extent from the injuries. The illness has recurred since the beginning of this year, but he hasn’t been able to receive the standard treatment due to political pressure. Thus, he died at the beginning of this month from injuries and wounds he’d sustained in prison.

The Tibetan residents of the Drakgo County, including monks and laypeople, organized a demonstration against the discriminatory and repressive policies of the Chinese government in January 2012. Residents remonstrated against living under such policies and instead demanded freedom and religious rights. Chinese authorities abruptly broke up the protest march by firing gunshots randomly into the crowd, causing several Tibetans to die and many others to be injured. Yonten was among several Tibetans killed and at least 40 others severely injured in the retaliation.

Geshe Tenga offered condolences and advice to the families of the deceased and injured following the incident. Moreover, he provided sound guidance and treatment assistance to the victims. As a sign of solidarity, Tibetans from nearby counties including Tawu (Ch: Daofu) provided assistance and condolences to those injured in Drakgo.

Many Tibetans in Drakgo gathered together in the monastery following the event during which Geshe Tenga addressed them. The following is an excerpt from his speech:

“All parts of Tibet have witnessed peaceful demonstrations since 1959 when the Chinese invaded Tibet. Tibetans in Drakgo have protested continuously since 2007 as a result of China’s oppressive policies and infringement on Tibetan rights and freedoms. This has left us unable to control our emotions and suffering any longer. Tibetans’ desperate and genuine requests for freedom of expression and religious rights were met with brutal retaliation by Chinese officials. Such behavior is beyond comprehension. There is no point in telling or informing the Chinese leaders about anything. To maintain their position and power, the Chinese authorities brutally cracked down on the Tibetan people in the name of “protecting the motherland” and “securing the welfare of the people”. We cannot accept such people as leaders or give them our consent.”

“Even if it takes sacrificing oneself so that the Tibetan people are able to achieve their rights and freedom, it is critical to urge the Chinese people to combat hardline Chinese policies, expose and topple the government held by the adamant Chinese leaders. It is essential that Chinese citizens are fully aware of the importance of being able to enjoy freedom and equality. The Chinese people need to be informed that Chinese senior leaders will not stand a chance if the whole nation stands against them.”

“Following are four important points on which we must speak up for: First, we all must mobilize our collective strength to safeguard the rights and wellbeing of Tibetans. As a second step, we must continue to advocate for freedom of expression and religion in Tibet so that His Holiness the Dalai Lama can return home. This will fulfill the wishes and requests of thousands of Tibetan people. Thirdly, we must strive to preserve Tibetan religion and culture, along with compassion and peace, so as to foster overall peace and prosperity for all sentient beings. Last but not least, we must continue to strive forward on the path of truth and non-violence to mobilize and win the support of people and intellectuals throughout the world for the cause of Tibet.”

“Not only are the aforementioned arguments in accordance with international laws and orders, but they also comply with Chinese laws and constitutions. As a result, our struggle for rights and freedom is one of courage and pride rather than one of unlawfulness and unreasonableness. Therefore, we should never give up and must always push forward to achieve our goals”, he said.

It is for this reason that the Chinese authorities arrested and sentenced him to prison.

Geshe Tenzin Pelsang was born in 1965 in Norpa village, Drakgo County, Karze Prefecture. As a child, he studied Tibetan Buddhism in the local monastery.

He studied Buddhism at the Drepung Loseling Monastery in south India in 1986. Upon graduation with a Geshe degree (a doctorate in Tibetan Buddhism), he returned to Tibet.