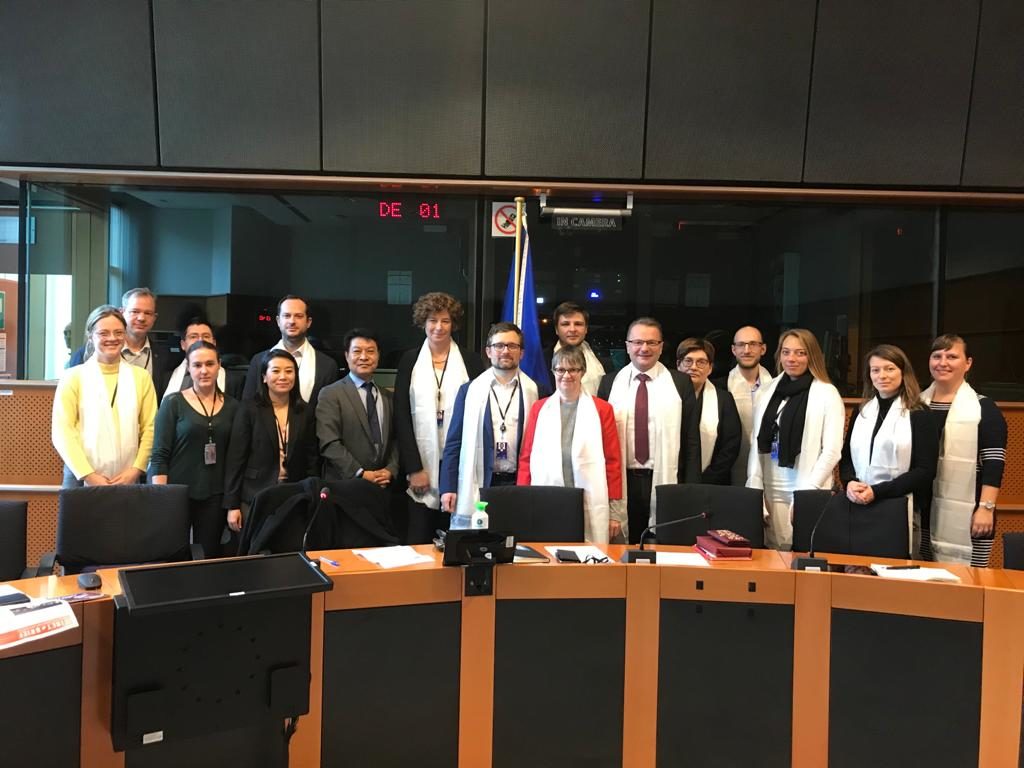 File photo of Tibet Interest Group inauguration in the European Parliament. Sponsors of question to the EU were present then.

Brussels: “The European Union has consistently indicated that it expects China to respect the Dalai Lama’s succession, in accordance with Tibetan Buddhist standards. This position was also recalled at the previous meeting on 1 April 2019. The European Union will continue to express its position on this issue.” writes Mr. Joesp Borrell, the EU Foreign Affairs Chief and Vice President of the European Commission in his concluding written response to the question of the MEPs Petras Auštrevičius, Aušra Maldeikienė, Hannes Heide, Francisco Guerreiro, and Petra De Sutter.

The question was in reference to the EU’s position on the issue of Chinese interference and Dalai Lama’s reincarnation and therefore what was the EU’s stand on the matter.

The MEPs are close friends of Tibetans with whom the Office of Tibet, Brussels maintain respectful relations. All of them are also active in the Tibet Interest Group (TIG) of the European Parliament.

ICT Brussels has campaigned hard for this advocacy.

Below is the full text of the question and the answer.

Question with a request for written answer E-000811/2020 to the Vice-President of the Commission / High Representative of the Union for Foreign Affairs and Security Policy Rule 138 of the Rules of Procedure Petras Auštrevičius, Aušra Maldeikienė, Hannes Heide, Francisco Guerreiro, Petra De Sutter

Subject: Chinese interference in the succession of the Dalai Lama In recent years, the Chinese government has repeatedly made it clear that it intends to intervene in the reincarnation of the Tibetan spiritual leader, the Dalai Lama. Not only does this position run counter to the centuries-long Tibetan history of the Dalai Lama’s continued designation without foreign interference, but it also violates their fundamental right to religious freedom, including their right to select religious leaders and teachers themselves according to their traditional religious customs. In response, in 2019, the “Tibetan Policy and Support Act” was introduced in the United States Congress, stating that the appointment of a future Dalai Lama and other Tibetan Buddhist leaders is only possible on the basis of a decision by the Tibetan Buddhist community. The Dutch and Belgian foreign ministers share this view. What is the European Union’s position on the succession of the Dalai Lama? What concrete measures does the EU intend to take to raise this issue?.

The European Union has regularly expressed concerns about restrictions on freedom of religion or belief and has called on China to respect the rights of persons belonging to minorities, in particular in Xinjiang and Tibet. This position was publicly expressed in the United Nations Human Rights Council (UNHRC) and in the Third Committee of the United Nations General Assembly and was also raised bilaterally in contacts with the Chinese authorities. In the framework of the human rights dialogue between the EU and China, the European Union has consistently indicated that it expects China to respect the Dalai Lama’s succession, in accordance with Tibetan Buddhist standards. This position was also recalled at the previous meeting on 1 April 2019. The European Union will continue to express its position on this issue.

Note: This is an English translation of the official Flemish text.