European Union criticism of domestic policy in China is potentially undermining the strong relationship that exists between the two regions, a senior official from Beijing has warned. 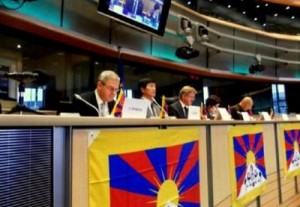 Lobsang Sangay (second left) at the Conference for Genuine Autonomy in the European Parliament, 29 November.

Speaking at the Chinese embassy in Brussels, Mr Zhu Weiqun, Vice-Minister of the United Work Department of the CPC Central Committee, said that despite the cordial relations between his country and the EU, continued criticism by European officials of Chinese state policy could harm relations at what is a crucial time for the global economy.The vice-minister was specifically referring to a recent incident in which the prime minister of the Tibetan government in exile, Lobsang Sangay, spoke before the foreign affairs committee of the European Parliament in Brussels, at the invite of certain parliamentary members.“China and Europe have a very solid relationship,” Zhu Weiqun said, and there is China-EU co-operation in the context of the economic crisis and the sovereign debt crisis. It is important that we work more closely.”