*His Holiness the Dalai Lama announced the discovery of the Eleventh
Panchen Lama to Tibetan audience at Thekchen Choeling in Dharamshala.
The tulku is Gedhun Choekyi Nyima, born on 25 April 1989 at Lhari in
the Nagchu region of Central Tibet.

Today is a special occasion to announce the confirmation of the
All-seeing Panchen Lama’s reincarnation. I would like to tell you all
that the time has come for the new incarnation to start his work while
the situation is critical. It is due to the fruit of spiritual
commitment  speaking from the broader perspective, over many aeons,
or, from a narrower perspective a long time  that the Panchen Lama has
come to serve the cause of the Buddha Dharma, or more practically, the
spiritual heritage of the snow land of Tibet and its people. Secondly,
from the story of Father and Son Aryas, it becomes clear that the
Father Arya and the Son have had a special relationship ever since the
time of Choegyal Kunchok Bhang.

In order that such commitment (of the Panchen Lama) comes to fruition
without any obstruction from outside, we are praying here today.

Speaking from another angle, the Dalai Lama is gradually becoming old.
Generally speaking, from the point of view of age, the new incarnation
of the Panchen Lama becomes somebody who has to continue my work. Since
the Panchen Lama has a special concern to continue my responsibilities,
he is important from every point of view. Therefore, I request everyone
to pray for his long life and success.

In the document there is a brief explanation of how the reincarnation
has been confirmed. As well as making spiritual offerings, we made
efforts to send a religious delegation from here when the Panchen Lama
passed away. We confirmed the names of the delegation members and
contacted the Chinese government. The delegation was to be headed by
the Choeje of Jangtse College at Gaden Monastery as this matter relates
to him. However, the delegation could not go. At that time, I hoped
they would be able to conduct all the religious rites, including making
offerings at the tomb of the Panchen Lama, and then make a detour to
Lhamo Lhatso (the sacred lake of visions, near Lhasa) for investigation
purposes.

Subsequently, when it was time to search for the reincarnation, I made
efforts to send a small committee to Tibet. I contacted the Chinese
government for this purpose, but to no avail. I did this as the present
incarnation has a very crucial role to play. There are several
political reasons which make him crucial. Also, one cannot rule out the
possibility of an inauthentic reincarnation. That is why I hoped to
identify the reincarnation, first by investigating all the prospective
candidates in exile and every part of Tibet, then by short-listing the
names of the more hopeful candidates. Then we would have rotated the
dough balls [the names of the candidates are rolled into balls of
dough] at a gathering attended by important persons from exile, from
Tibet, and from Tashilhunpo Monastery. However, since this depended on
external co-operation, we could not conduct the search in this manner.

What, then, was the alternative? There were quite a number of hopeful
candidates in the central and border areas of Tibet. Outside Tibet,
also, there were candidates in Ladakh, Dharamshala, etc. But it was
difficult to make decisions without receiving full information about
all the candidates. Moreover, we had to make sure that no candidate
with auspicious signs was left out. Therefore, it took a long time.
Also, when we checked it was the right time to confirm the
reincarnation, we had signs indicating that the confirmation should
wait until the dawn of the following year.

We collected the names received from various sources at different
points in time. We had the names and details of about twenty boys. We
had the details of all these boys, of some we also had photographs. We
had rough descriptions of auspicious signs concerning these boys. It
then became apparent that no additional names were going to come. There
were signs that the time had come to confirm the reincarnation.
Therefore, I made this decision.

Coming to the process of making the final decision, I did a mo
(divination) to find out if the reincarnation was among the candidates
whose names had been submitted. The divination was affirmative. After
selecting the more likely candidates, I threw the divination dice while
pronouncing the young child’s name. I did it three times, as is my
usual practice. The divinations showed extremely good indications.

My initial hope of all of us meeting together did not materialise as
this has to be kept extremely secret. However, I did not rely solely on
dice divination. I also rolled the dough balls while uttering the
child’s name. The dough (with the reincarnation’s name hidden in it)
emerged as if jumping out on its own. Not relying on the first draw, I
marked this particular dough ball and made another rotation. The same
ball came out. I was now convinced that this was the authentic
reincarnation. So I made the decision.

This being a very difficult time, my concentration wavers. However,
historically and in my personal case, when the Panchen Thupten Choekyi
Nyima recognised the reincarnation of the Thirteenth Dalai Lama, he
took a special interest in me, a child born in Amdo, the land of
Tsongkhapa (founder of the Gelug school of Tibetan Buddhism). This was
told to me by the late Lord Chamberlain. Therefore, there is a special
personal relationship between the Panchen Lama and me.

Whatever the case may be, the people of Tibet have placed their hope in
me to take the final decision regarding the Panchen Lama’s
reincarnation. This is the case not only with Tashilhunpo, but also
with people from different parts of Tibet.

The late Panchen Lama had a very difficult life. He was born in Amdo.
Later in his life he visited Amdo several times. He also visited Kham.
Therefore, there were numerous relationships resulting from his travels
and deeds in those areas. There was great concern in some areas
regarding the Panchen Lama’s reincarnation. People told me that I
should make the decision regarding the reincarnation. It is for these
reasons that I made the final selection. As stated earlier, efforts
must be made to ensure that young incarnation has a long and successful
life.

Note: His Holiness the Dalai Lama
delivered the above speech extempore in Tibetan. This English
translation is not issued by the Office of His Holiness the Dalai Lama,
and any comparison, therefore, should not be made with the one in
Tibetan. This is only for information of the visitors who can’t read
Tibetan. In case of doubts, consider the original speech in Tibetan. 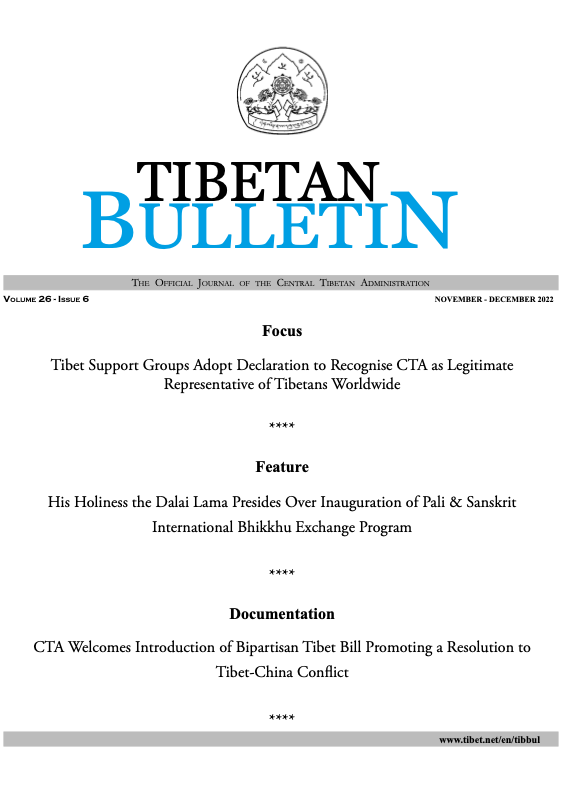