Prague – Czech Foreign Minister Karel Schwarzenberg (TOP 09) talked to the Tibetan Dalai Lama, who is on a three-day visit to Prague, at a short private meeting this afternoon, Schwarzenberg told CTK today. 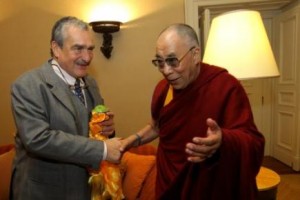 It was “an inspiring conversation” as always and “a friendly private meeting,” Schwarzenberg said without elaborating.

Schwarzenberg is probably the only active supreme Czech politician who has met the Dalai Lama during his current visit to the Czech Republic.

The meeting took place in a hotel in Prague centre where the Tibetan spiritual leader arrived with some people accompanying him and a police escort at c. 16:00. Schwarzenberg arrived a bit earlier and he left the hotel before 17:00.

Before the meeting, the Dalai Lama gave a public lecture entitled “In Search for Happiness in Uncertain World,” at the Prague Congress Centre.

The Chinese embassy in Prague is always closely watching the Dalai Lama’s stay. The embassy claims he is promoting Tibet’s secession from China during his journeys.

Human rights activists have criticised China for its occupation of Tibet sixty years ago and the oppression of Tibetan people.

The Dalai Lama was invited to the Czech Republic by former Czech president Vaclav Havel. His three-day stay is organised by the Forum 2000 foundation.

The Dalai Lama arrived in Prague on Saturday on the Human Rights Day. He returned there after two years.

He had a short meeting with Havel after the arrival.

Havel thanked the Dalai Lama, his long-term friend, for arriving in the country where people love him but politicians fear him a bit.

Forum 2000 foundation head Oldrich Cerny explained that Havel’s words about Czech politicians fearing the Dalai Lama referred to the strengthening of China’s power position in the past years since the Dalai Lama’s previous visit to the Czech Republic.