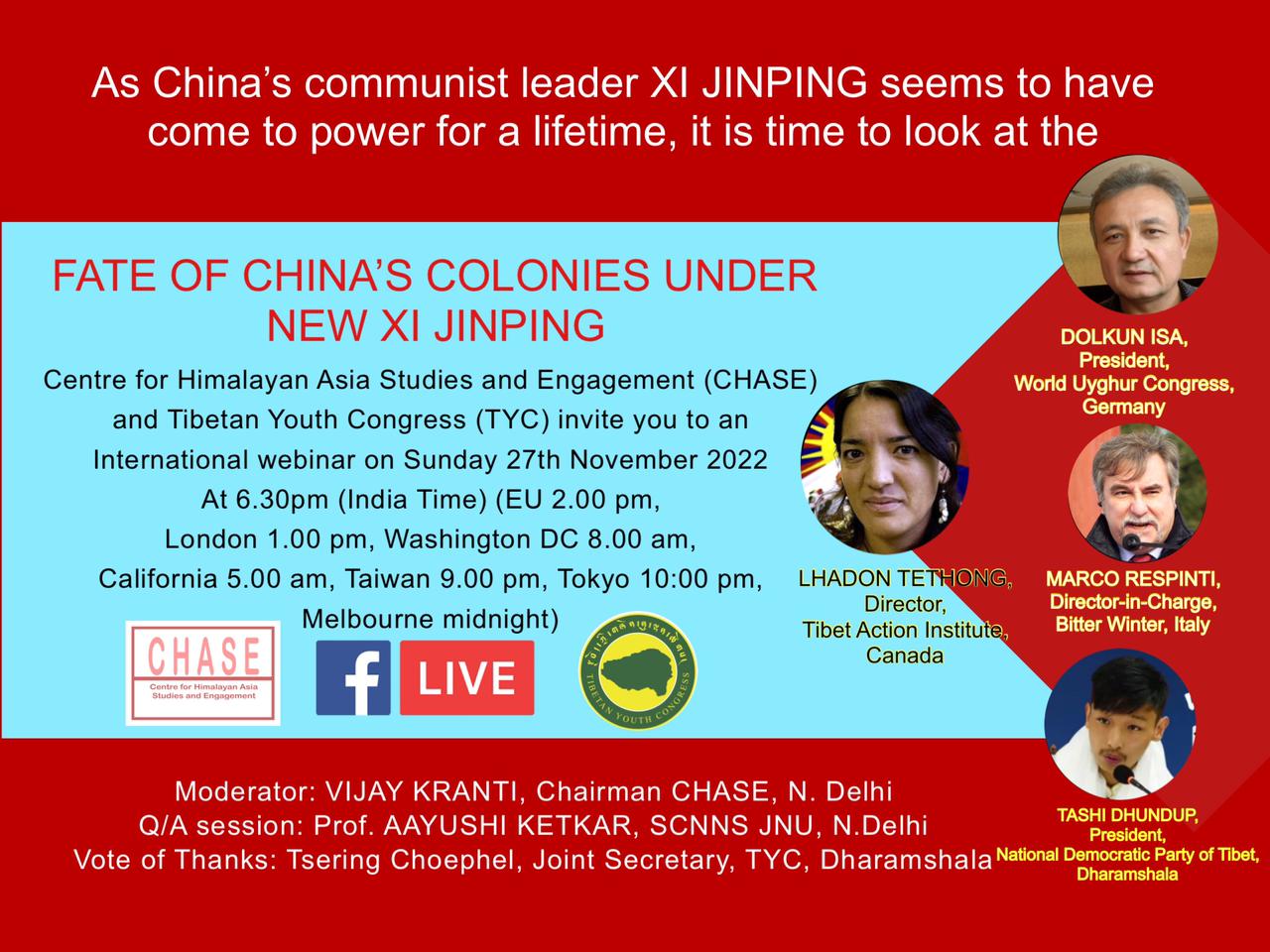 Expert speakers at an international webinar expressed deep fears of further escalation of the ongoing process of what they termed as ‘cultural genocide’. The discussions were focused on China’s forcibly occupied colonies namely Tibet, East Turkistan (Ch: Xinjiang) and Southern Mongolia. China’s latest colony Hong Kong too was referred to by some speakers who regretted the brutal crushing of the democratic character of Hong Kong. This ‘Cultural Genocide’ which the expert referred to is a process initiated and forcibly implemented by President Xi Jinping during past ten years of his rule over China.

Speakers were of the opinion that with Xi getting a license to rule China infinitely for as long as he decides and with as much unchallenged brutality at his command, there are serious fears that new generations of these colonies are going to undergo intensive brainwashing with the aim of producing new citizens of China who would keep looking like Tibetans, Uyighurs and Mongols but their souls and minds would be of perfect communist Han cadres. However, the experts see some ray of hope in the ongoing resistance among the Chinese citizens against the draconian immobilization of the citizens under Xi Jinping’s  ‘Zero-Covid’ policy which has started exploding into mass protests against the Chinese communist government across China.

On Saturday, the 27th November 2022, the Centre for Himalayan Asia Studies and Engagement (CHASE) and Tibetan Youth congress (TYC) jointly organized an international webinar of subject “FATE OF CHINA’S COLONIES UNDER NEW XI JINPING”. The webinar was addressed by four prominent speakers belonging to Tibet, East Turkistan (‘Xinjiang’), Italy and India. These experts were Dolkun Isa who is the international President of World Uyighur Congress (WUC). He works from Germany but he participated in today’s webinar from Australia. Marco Respinti, who participated from Milano in Italy and is a well-known Italian journalist and Director-in-Charge of ‘Bitter Winter’ which is a daily newspaper focused at religious suppression and denial of human rights in China and is published in eight language. Ms. Lhadon Tethong, a prominent Tibetan activist who is also the Director of Tibet Action Centre. She participated from Boston, USA. And fourth speaker was Tashi Dhundup who is the President of Tibet’s only political party viz. National Democratic Party of Tibet (NDPT). He joined in from Dharamshala. The webinar was moderated by Vijay Kranti, journalist, Tibetologist and Chairman of CHASE.

In their concluding remarks at the end of the webinar all experts were of unanimous opinion that now is the high and most opportune time when peoples of China’s colonies should join hands and make a common cause against the Chinese colonialism. They also agreed to join hands with like-minded people and organizations across the world to put pressure on governments to stop treating China exclusively on considerations of economic benefits and should start taking serious note of China’s aggressive policy of replacing the established world order with the one focused at only China’s economic and military interests.

According to Marco Respinti, “The bloody cult of personality that characterizes the old Maoist regime as a lucid ideological folly seems to rejuvenate Xi Jinping’s aim of sinicization of as much of the world as he can do through his Belt and Road Initiative (BRI). And unfortunately we don’t see any resistance to it at international levels. No one is showing or has the will to stop this process. It is sad that the democratic world has chosen to leave aside and ignore his policy of violence, persecution and battered human rights and is only aimed at making some economic benefits from China.”

Dolkun Isa, in his detailed analysis of how the situation of human rights has already severely deteriorated under Xi Jinping’s rule over past ten years, regretted the world indifference, especially of the Muslim countries, towards ruthless  crushing of human rights of the Uyghur people. “More than 8000 (eight thousand) mosques in my country have been demolished by the Chinese communist regime. More than three million Uyghurs are languishing and being subjected to worst torture in the newly established concentration camps across my country by the Xi regime. And more than a million children have been snatched away by the Chinese Communist Party to be brainwashed behind the wall of residential communist schools. But still the world community is looking helplessly,” he said. Calling upon the world community to stop enriching the Chinese regime by buying cheap solar cells and cotton products which are products are grown and produced in ‘Xinjiang’ through forced bonded labour by the CCP.

Lhadon Tethong analyzed the commonality in the colonization, exploitation and denial of human rights in Tibet, Xinjiang and S. Mongolia by the Chinese regime over past many decades. “Things have gone from bad to worse during past ten years rule of Xi Jinping. And now with new boundless powers in the hands of Xi, he is bound to run amuck in all colonies of China due to absence of any accountability, either to the people of his own country or to the world community” she said. Speaking about a complete and ruthless lockdown on any flow of information from her country Tibet, Lhadon said, “During past few decades Tibet attracted wide world attention because despite the iron curtain some information could travel out through the international media and foreign visitors. But due to strict digital surveillance and locking out of Tibet, the world today just does not know what is happening inside today’s Tibet. Unfortunately the world media has come as no relief to the deafening silence which prevails in Tibet today.”

Tashi Dhundup, youthful President of NDPT said that we can understand what will be the fate of China’s colonies under a more powerful Xi Jinping, only if we understand what his policies have been towards these colonies of Chine in past ten years of his regime. “Although the process of suppression, destruction and crushing of human rights has been in process since China occupied these countries, but the era of Xi is witnessing an unprecedented ‘Cultural Genocide’ in these colonized countries. In history the world used to talk of Tibet as the ‘Shangri-la’. But it was mainly during the past decade of Xi’s rule that Tibet has gained the dubious distinction of being the ‘Hell on Earth’”, he said. He listed the campaigns of destruction of spiritual centre like Lharung Gar; demolition of Budhha and Maitreya’s massive statues; ban on Tibetan language and forced imposition of Chinese language in Tibetan education; forcible taking away of a million Tibetan children to communist residential schools; forced marriages of Tibetan women to Han settlers; and mass DNA profiling of Tibetan people as examples which simply show that Xi’s dream about Tibet is complete genocide of Tibetan culture and identity. “But it only exposes the double speak of world leaders and world governments that despite being aware of these Chinese atrocities in China’s colonies, the world leaders and world institutions are keeping quiet”, said Tashi.

In their concluding remarks the expert had a common observation that after Xi’s victory at the just concluded Chinese Congress, the world governments and world leaders have once again started embracing him because of their own economic greed. They regretted that Tibet and Hong Kong have again fallen off the world’s radar. “But the way Xi Jinping and the CCP have started a new phase of repression in Tibet, Xinjiang, S. Mongolia and Hong Kong in recent past, it is a clear admission by both of them that the resistance against Chinese colonialism and determination to win back their independence have refused to die,” said Lhadon.