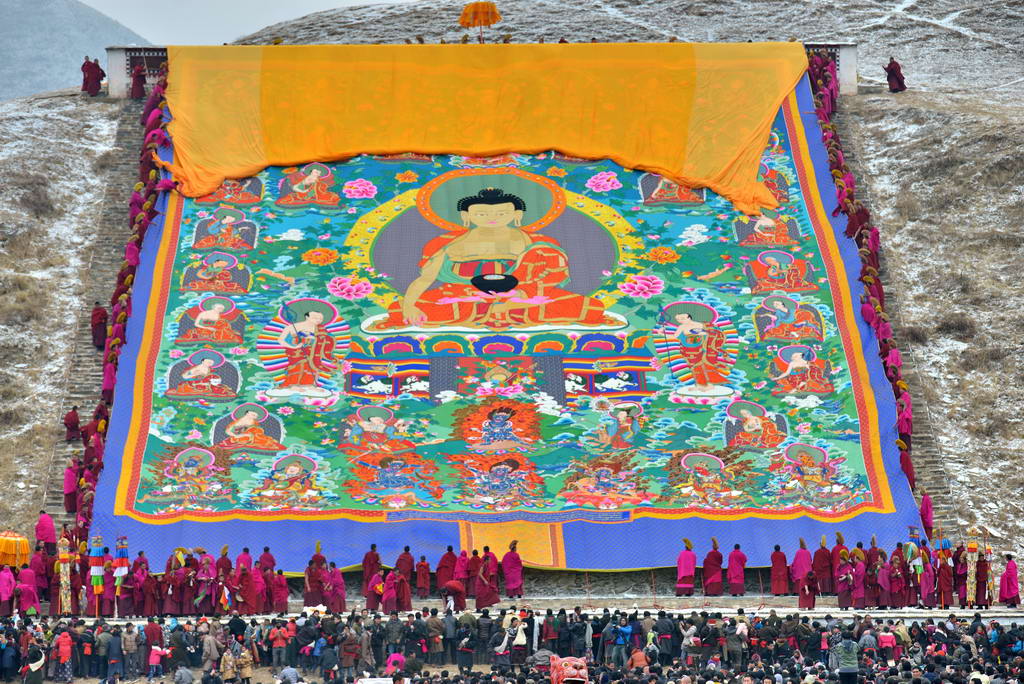 Chotrul Duschen [Tib: Cho ‘phrul smon lam chen mo], the Great Prayer Festival of Tibet falls in the first lunar month of Tibetan calendar just after Tibetan Losar – New Year festivities. It was once observed with great religious fervour by the Tibetans in Tibet every year. Monks, nuns, officials and devotees from all walks of life gather to join in the prayers and to receive the blessing of Jowo Rinpoche and the deities in Lhasa Tsuglagkhang. The festival originated in India to honour Buddha on his victory in magical performance over six heretic masters in Shravasti in modern day Bihar city. It was considered auspicious month and celebrated by the Indian Dharma kings. Later the Tibetan Kings and devotees also celebrated it in some form or others in Tibet.

However, it was Je Tsongkhapa [Tib: rJe tsong kha pa], a great scholar and the founder of Geluk [Tib: dGe lugs] school of Tibetan Buddhism, who first established the festival formally in 1409 CE. It was first observed in Lhasa, during which the statues of Jowo Shakyamuni at Lhasa Tsuglagkhang and statues of other deities were honoured and adorned appropriately. It initially started with the monks from Sera and Drepung monasteries. Later, others also joined in. More than eight thousand monks attend this fifteen-day long religious festival to pray for the peace and prosperity of all sentient beings.

In 1614 AD, the Fourth Panchen Rinpoche Lobsang Chosgyan introduced the conduct of Geshe Lharampa examination for the monks from Sera, Drepung and Gaden during the festival. Monks debated, and their scholarships tested in public and were honoured with Geshe degree. Tibetan religious dances, chams were performed and great scroll of Buddha’s thangka painting unfolded for everyone to view and receive blessing. The Festival also came to be known as Lhadan Mon lam Chenmo [Tib: lHa ldan smon lam chen mo], the Great Prayer Festival. Since then except for a few occasions the Festival was observed in Tibet until the Chinese occupation of Tibet in 1959. Monks, nuns and people from different part of Tibet flock in Lhasa during the time to attend this annual religious festival.

His Holiness the Dalai Lama, despite the great responsibility as a head of the state and the tense situation under the Chinese invasion of Tibet, studied hard and gave his test during the Great Religious Festival on the 13th day of Chotrul Duchen in 1959, Earth-Boar year. This year’s Great Prayer Festival marks the 60th anniversary of His Geshe Lharampa test. His Holiness has related the experience in His book, “My Land and My People” in some detail. “I appeared for my final examination, during the annual Monlam festival in Lhasa…. I was proud and happy to be taking the final examination, and to receive the degree of Master of Metaphysics, after so many years of studying the great teaching of Lord Buddha…”.

After His escape to India, His Holiness the Dalai Lama had the old and young high incarnate lamas and geshes, who had fled Tibet stay in Buxa in West Bengal, and were later moved to South India. The Festival continued to be observed, albeit in a limited scale. In 1969, when Dharamshala Tsuglagkhang was completed, the Festival was organized in Dharamshala and it continued to be celebrated every year after Tibetan Losar since then, during which His Holiness the Dalai Lama gives teachings to the public.

The Prayer festival is also famous for the butter sculpture offerings, known as Chenga-chodpa – full-moon offering, made by the monks from Gyuto and Gyumed Monasteries alternatively. Butter sculpture is unique to Tibetan religious art where beautiful scared images of Buddhas, deities and animals are made on Tormas – religious cake offerings. It is displayed in the main Temple for everyone to feel the sacred images in colourful butter and to view the exquisite beauty of the offerings.

This year’s, Great Prayer festival marks the 60th anniversary of His Holiness the Dalai lama’s Geshe Lharampa examination. As it is Phag-lo, Boar-year, according to Tibetan astrology, it is dGung-skeg, obstacle-year for His Holiness. Tibetans and followers of His Holiness should commit to pious deeds and practice His teaching to mitigate the obstacles.

In Tibet, since the Chinese occupation of Tibet, Monlam Chenmo festival has not been allowed. China permitted it in 1986 for two or three years to demonstrate religious freedom in Tibet. Later they disallowed it for the fear that such a vast gathering of devotees would pose challenge to its repressive rule. Today, it has become a time for the Chinese regime to impose strict surveillance and monitor Tibetans movement in and around Lhasa Bakhor and the monasteries, and they brazenly say there is religious and cultural freedom in Tibet!