CHENGDU, China — This regional metropolis is roughly 200 miles from the wave of protest by ethnic Tibetans that is sweeping the towering mountains of western Sichuan Province. But take a stroll through Chengdu’s Tibetan quarter, and the tensions generated by the distant unrest become palpable. 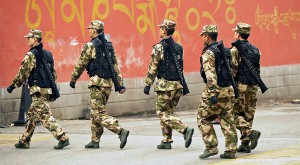 Faced with the largest outbreak of Tibetan unrest since riots in Lhasa and elsewhere in 2008, the government is taking no chances that the turmoil — which has included Chinese forces firing on and killing some demonstrators — will spread.

Armed soldiers in dun-colored camouflage trooped up and down Wuhouci Hengjie, a tree-shaded lane that is home to two government offices. Police cars, vans and even tow trucks, their red-and-blue light bars flashing, were stationed every 50 to 100 yards. Bands of police officers patrolled the sidewalks; on one corner, they upbraided an angry Tibetan man as anxious women grabbed his arms, pulling him away.

Asked about the heavy security, one shopkeeper sarcastically suggested the forces were in town to prevent rowdiness during the spring festival, a traditional Chinese holiday.

He added quietly: “I don’t dare talk. The police came to my shop and told me not to spread the word.”

But word of the unrest has spread anyway, despite a crackdown that has sealed off outside access to western Sichuan and, by some reports, disabled telephone and Internet communications in some restricted areas.

The Chinese government says it is only defending loyal citizens from revolutionaries who seek to sever Tibet from Chinese rule. Many outsiders, and perhaps most Tibetans, believe otherwise, casting the latest unrest as a continuing struggle against Chinese repression of political and religious freedoms.

The recent troubles appear to have intensified when four Tibetans set themselves on fire this month, accelerating a campaign of self-immolation that has killed at least 11 Tibetans since March 2011.

Groups favoring more freedom for ethnic Tibetans say the shootings started in the middle of the month, when a crowd of Tibetans tried to take away the body of a Tibetan man who had set himself on fire in Aba, or Ngaba in Tibetan, northwest of Chengdu.

Since then, the groups say, they have received reports of protests and more shootings, with three shooting deaths in the past week. Because of the security cordon, those reports could not be independently confirmed. The clashes have unfolded mostly in areas where Buddhist monasteries or schools have long been centers of opposition to Chinese rule.

Last Monday, the London-based advocacy group Free Tibet said, Chinese forces killed at least one person and wounded at least 34 in Luhuo, or Draggo, a monastery town west of Chengdu.

On Tuesday, another man is said to have died in Sertar, or Seda, a town that had been a center of Buddhist teachings, hosting nearly 9,000 students, until Chinese authorities ordered most of the Larung Gar religious academy vacated in the last decade.

And last Thursday, a man in Rangtang township, or Dzamtang, was fatally shot as Tibetans tried to stop the authorities from detaining another man accused of distributing leaflets about the self-immolations.

The government has acknowledged the shootings in Sertar, but it said its forces fired on protesters after demonstrators fired on them, wounding 14 officers.

It is likely that protests have also occurred elsewhere, both Tibetans and officials of advocacy groups said last week. “We heard from people coming from our hometown that people of our ethnic group have clashed with the People’s Liberation Army,” said one woman from Ganzi Prefecture. “We can’t fight them. There are too many.”

A reporter who sought on Thursday to drive to Ganzi was halted at a police checkpoint halfway to his goal and, after inspection of his journalist’s visa, politely but firmly turned away.

“There is thick ice ahead,” the police said. “It is not suitable for foreign guests.”

Two backpackers were also ordered to turn around, but were told that the area was unsafe because “the Tibetans are in revolt.”

By week’s end, a full-scale lockdown of the restive area appeared to be in effect, with milder restrictions from Chengdu to Lhasa, Tibet’s capital and the scene of the worst riots in 2008.

The Chinese government has said 18 civilians and a policeman died during violence that was directed at Han Chinese migrants, whose growing presence angered many native Tibetans. Tibetan groups say the violence left scores of Tibetans dead at the hands of Han Chinese residents and government security forces.

Security patrols have been significantly beefed up in Lhasa, and the authorities are conducting house-to-house searches to document the identities of residents, said Stephanie Brigden, the director of Free Tibet.

She said officials were letting residents know that they knew who had relatives outside the country, and that they expected the residents not to tell those relatives what was happening.

“They say that they know if they are making international telephone calls, and if they are, they shouldn’t discuss anything political,” Ms. Brigden said. “They’re really using intimidating tactics to make sure information isn’t disseminated.”

But some inside the locked-down area are getting their information out in other ways. Posts on Twitter and Chinese microblogs documented some of the local reaction to the strife before being deleted from Chinese sites.

“A cold morning in Danba County town,” one post stated. “It’s all very chaotic over here, with the police searching all nonlocal vehicles and all the hotels aren’t being allowed to accept Tibetans or foreigners.”