Dharamshala, 26 September 2022: In the wake of rising Covid-19 cases in Tibet, China proceeds to adopt draconian measures to enforce its Zero-Covid Policy which is evidently causing more harm than good. The mismanagement of the pandemic outbreak in Tibet only exposes Beijing’s failed Covid-policy implementation resulting in the endangerment of Tibetan lives. In an attempt to present itself as a role model in curbing the outbreak, China is downright disregarding the safety and security of Tibetans in need of medical assistance and covid care evidenced by the dire lockdown conditions being reported and exposed online by a number of affected Tibetans. Tibetans complained about crowded quarantine facilities, food scarcity, lack of medical supplies and unhygienic living conditions. Some Tibetans likened the condition to being worse than a prisoner and another Tibetan was beaten up for protesting against the dire living situation under the Covid lockdown.

China publicly reported the first Covid outbreak in Tibet on 8 August this year, with 22 cases of Covid-positive in Lhasa and Ngari. This has been the first official admission of Covid in Tibet after the repeated public announcements of the Zero-Covid policy in the “TAR” since early 2020. Within weeks, at least 3627 people had reportedly tested positive indicating a rapid increase. Strict government-imposed lockdowns were soon enacted in Lhasa, Shigatse, and Ngari after news of positive cases were reported from nearby areas of Nagchu, Chamdo, Lhoka, and Nyingtri. Currently, an estimated 53,076 people reside in isolation centres in the “TAR” alone. Meanwhile, a number of Tibetan areas outside of the “TAR”, including Karze and Ngaba in Kham and Amdo provinces respectively, continue to report daily Covid cases resulting in sporadic lockdowns, Chengdu being the worst-hit area in China’s Sichuan.

Meanwhile, China’s propaganda machinery has been actively covering up the situation. China’s state media claimed no shortcomings in the implementation of the zero-covid policy during the latest covid outbreak in Tibet. When the Covid cases escalated, Chinese authorities labelled the BA.2.76 virus as a “foreign import” and misled the public with false claims of high-quality medical services and timely supply of essential commodities. On 9 August, the “TAR” Internet Network Information Center called for “striking hard” on those “spreading pandemic rumours” and warned that “offenders” would be severely dealt with. Several propaganda videos even depicted Chinese Communist Party officials as heroes in their “tough battle against the Covid”.

Tibetans’ desperate need to tell the truth about the miserable conditions inside China’s quarantine camps and Zero-Covid’s implementation exposed these false campaigns. On the internet, videos demonstrate overcrowded and tacky makeshift hospitals, as well as buses transporting large numbers of people to these facilities. In reality, these facilities aren’t equipped with basic necessities such as clean drinking water, food, health facilities and a healthy environment. A Lhasa resident recently compared Lhasa’s current situation to the worst days of Shanghai’s two-month lockdown when people were left to starve. The spread of the virus proliferated due to officials’ mismanagement of mixing infected with those who are not infected, resulting in sickness at every level of society, from police to volunteers.

Despite the risk of reprisals in different forms, Tibetans have resorted to social media platforms to reveal their predicaments and made appeals to local authorities to immediately meet the needs of the Tibetans locked up in quarantine camps regardless of whether they contracted Covid or not. One person said: “We do not have Covid, but they still took us away. Who will be held responsible?” Another person stated, “Feeding filthy and spoiled food at the quarantine center does not seem appropriate. They are patients, not prisoners. If they cannot be cared for, they should not be quarantined in such deplorable condition”. The authorities’ unsympathetic actions were openly criticised by others. “We were kept together with eight hundred others. Neither the food nor the medicines nor the medical staff is adequate to care for us. Without food, how can starving kids survive?”, another Tibetan asked.

Due to the bravery of the Tibetans and their mounting exposé of the atrocious conditions over the recent days, Dradul, Lhasa City’s executive Deputy mayor, came forward to apologise for the city government’s mishandling of the Covid outbreak during a media briefing recently, vindicating public outcry of serious mismanagement and gravity of the Covid situation.

The Central Tibetan Administration calls on Beijing to adequately acknowledge the public criticisms made by Tibetans who have genuinely expressed their frustration at the lack of sufficient facilities and protect them from reprisals for honest opinions of the government’s mismanagement.

It is perceived that the mismanagement of the Covid outbreak in Tibet could be linked to the upcoming 20th National Congress of the Chinese Communist Party. The Zero-Covid policy, prioritised by Xi Jinping, China’s president, is likely being used to seize and suppress the parties’ so-called dissenters ahead of its most significant meeting. Yet, it is imperative that the government respects the rights of the Tibetan people under its international obligations and ensures that they are treated with respect and have access to adequate medical facilities and basic necessities under its Zero-Covid policy. During these trying times, the Central Tibetan Administration (CTA), requests the Chinese government to allow timely aid in the form of medicines and basic necessities to be extended to Tibetans to overcome the Covid crisis. CTA hopes China will permit them to utilise its experience and expertise to work on tackling the Covid outbreak in Tibet. We remain steady to extend any assistance in the form of immunity boosters Tibetan medicines, medical equipment, nurses, and volunteers without a second thought or hesitation to help Tibet fight the pandemic. 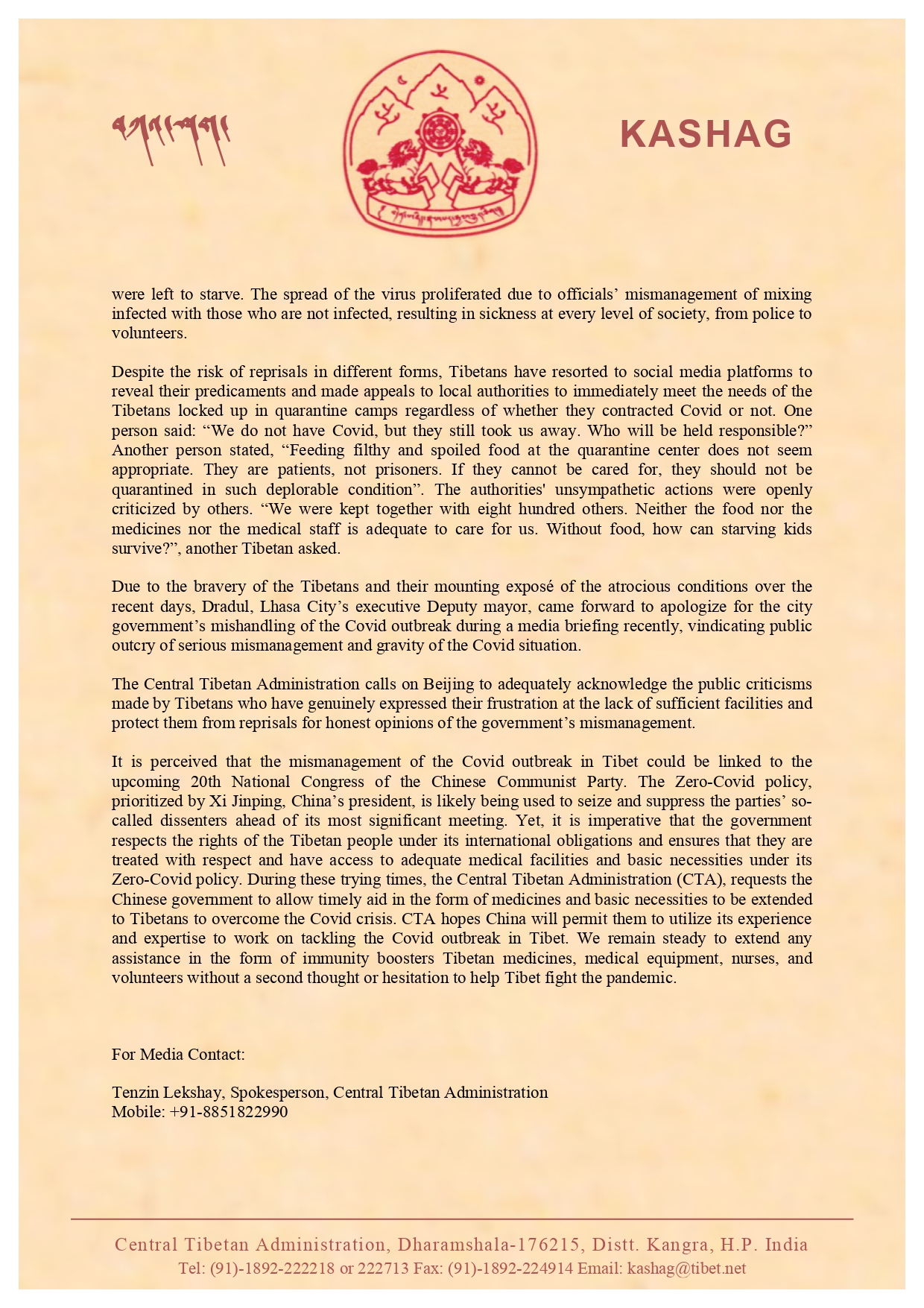