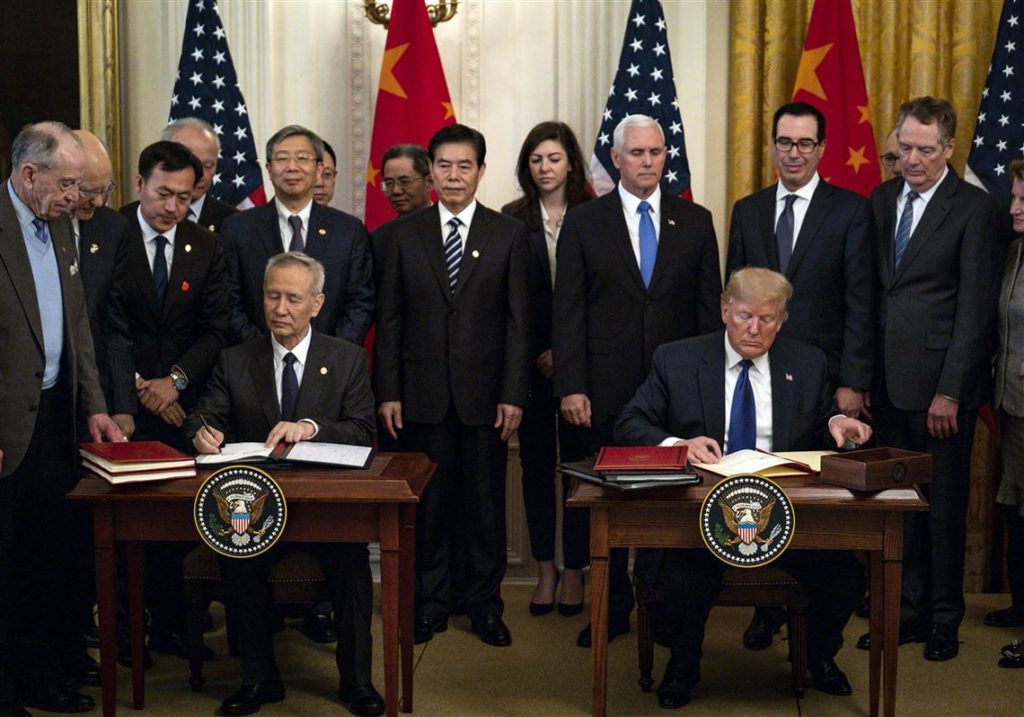 Liu He, China’s vice premier, and President Trump signed an initial trade agreement in January at the White House. Credit…Pete Marovich for The New York Times

The Hong Kong government has now postponed its legislative elections for one year.

The excuse was a spike in the coronavirus, but that was a transparent excuse.

Opposition candidates were clearly poised to make gains in September.

The cancellation was preceded by banning some candidates.

And this was preceded by the crackdown on protests, ordered by Beijing.

Hong Kong is now captive and the West seems helpless and tongue-tied in the face of this dire turn of events.

And then we have China’s record on human rights, which is surely the worst of any major power in the world and getting worse.

Last week, the United States imposed sanctions on a Chinese company — the Xinjiang Production and Construction Corps — as well as local officials in Xinjiang province for human rights abuses against Uighurs (Turkic-speaking Sunni Muslims native to Xinjiang) and other ethnic minorities.

Secretary of State Mike Pompeo, said this: “The Chinese Communist Party’s human rights abuses in Xinjiang, China against Uighurs and other Muslim minorities rank as the stain of the century.”

That is no small statement.

The Trump administration, to its great credit, and notwithstanding the accusation that the president would have looked the other way at the construction of Chinese concentration camps if he could get a fair trade deal, is currently the only small counterforce in the world to the Chinese government’s bullying, aggression and abuse of ethnic minorities, freedom fighters and anyone else who gets even slightly in the way of the regime.

It is a brutal regime and it is currently oppressing and torturing with impunity.

This is not new. The oppression of the Tibetan peoples has gone mostly unnoticed, never mind unchallenged, for three generations. But suppression of all obstacles, all dissent, has now been accelerated.

How does China get away with it?

China’s vast population and economic clout render it almost too big to contain, and its size and power are only expected to grow in the coming years.

China is an economic superpower now.

China clearly aims to be the superpower, in all respects, in the near future.

As a matter of both idealism and power politics, the U.S. should not simply stand by and watch all this happen.

For the United States to be as silent and hapless as it has been on human right in China is a violation of our own values.

Perhaps the key to human rights, aid to forces of freedom, and American self-interest on this matter is trade.

We weaned ourselves of OPEC. Why not China?

If we did that as a matter of national policy we would be free to speak up about human rights abuses in China and free to come unequivocally to the aid, at least morally and diplomatically and rhetorically, of Chinese freedom fighters.

This is the side we once said we were on — the right side of history and humanity. We need to be true to our principals and position in the world.

We also need to think pragmatically: Can we afford to continue to stand idly by when Beijing comes for Taiwan?