This year’s two delayed and shortened political meetings of the Chinese government in Beijing saw a renewed focus on an “anti-separatism campaign” and “stability” and a call for “absolute loyalty” by the Tibetan people to Chinese President Xi Jinping and the Chinese Communist Party.

The meetings, known as the “Two Sessions” of the National People’s Congress (NPC) and the Chinese People’s Political Consultative Conference (CPPCC), were held May 21 to 28.

Participating in the deliberations of the plenary meeting of the NPC delegation from the Tibet Autonomous Region (TAR) on May 22, State Councilor and Minister of Public Security Zhao Kezhi said, “We must do our best on the anti-separatism campaign and the implementation of various measures to maintain stability, strengthen infrastructure construction of stability, make preparations for long-term struggle.”

The TAR spans about half of Tibet, while other Tibetan areas are located in the provinces of Sichuan, Qinghai, Gansu, and Yunnan. The Chinese government often uses words like “anti-separatism” and “stability” to fear monger about Tibetans’ desire to live in freedom in their homeland, which China violently annexed in 1959 and has ruled over with an iron fist ever since.

Similarly, at the meeting of TAR NPC delegation’s work plan review on May 23, Wu Yingjie, secretary of the TAR Party Committee, said they should “strive to open up a new era of rapid development of Tibet and a new situation of long-term stability.” He further said they should “embody absolute loyalty to General Secretary Xi Jinping and the Party Central Committee with practical actions.” 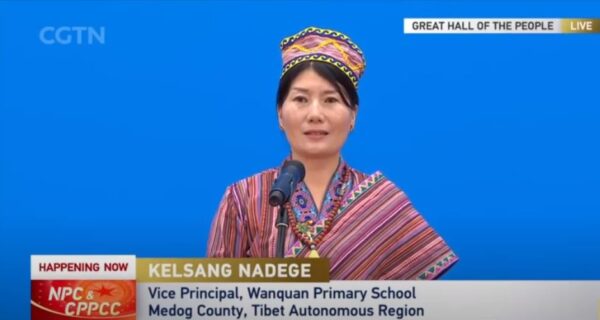 Screenshot of a Chinese TV broadcast of Kelsang Dickyi, who is an NPC deputy, speaking to the press during the Two Sessions held in Beijing in May 2020.

This year, state media reported that party leaders were stressing the need to strengthen the “four consciousnesses” and “four self-confidences” and implement “double safeguards.” These were mentioned by Zhao Kezhi and Wu Yingjie to the TAR delegation, by politburo member Chen Xi to the Qinghai delegation, politburo member Guo Shengkun to the Yunnan delegation, and NPC Vice Chair Yiligen Yimingbaha and Party Secretary Chen Quanguo to the Xinjiang (which Uyghurs call East Turkestan) delegation. Similarly, in an interview with official Chinese propaganda outlet People’s Daily, NPC delegate and TAR People’s Congress Chairman Lobsang Gyaltsen mentioned the need for strengthening and implementing these initiatives in the TAR.

All these instructions are aimed at consolidating the authority of Xi Jinping and the Communist Party. Chinese state media outlet Xinhua made this abundantly clear by stating, “Faithfulness to the core leadership of the Party is characterized by staunch loyalty to “the Communist Party of China (CPC) Central Committee, [its] General Secretary Xi Jinping as well as to Party theories, guidelines, principles and policies.”

The four consciousnesses are political consciousness, consciousness of the overall situation, consciousness of the core, and compliance consciousness. Xi, in his report at the 19th CCP National Congress in October 2017, mentioned the four consciousnesses as the representation of the need to maintain political integrity, grasp the entire situation of the country, follow the leadership core and keep in alignment with the leadership core. The four self-confidences are confidence in the chosen path, in the political system, in the guiding theories, and in the culture of socialism with Chinese characteristics. Three of these confidences were originally put forward by Hu Jintao to which Xi Jinping added the fourth. The double safeguards are “firmly safeguarding Xi’s status as the core of the CPC Central Committee and the whole Party, as well as the authority and centralized, unified leadership of the CPC Central Committee.”

Tibetan issue as a security problem

Zhao is formally a delegate from the TAR, although he has no connection with it. During last year’s NPC session too, Zhao was assigned to meet with the TAR delegation. At that time, Xinhua said he “called for efforts to firmly implement the Party’s strategy for governing Tibet.”

The fact that Zhao holds the position of China’s minister of public security has particular significance for his involvement with Tibet-related issues, as he oversees the security apparatus that is controlling the Tibetan people. Xi previously laid out his strategic concept to “govern the nation by governing the borders, govern the borders by first stabilizing Tibet.” This strategic concept reveals China’s top leadership’s thinking and framing of Tibet as a “security problem.”

Despite the absence of any violent insurgency in Tibet, an aggressive “counter-terrorism” drive with a strongly political dimension has led to increased militarization across the Tibetan Plateau. China’s counter-terrorism law, adopted in 2016, introduced further extrajudicial measures, reinforcing the powers of local police and Communist Party officials to impose restrictive measures and use violence against individuals with impunity.

Since Tibet shares a long Himalayan frontier with several South Asian states, China’s top leadership considers a heavy-handed stabilization of Tibet as a legitimate way to achieve its international relations goals in South Asia. Against the backdrop of China’s current military tensions in the disputed western sector frontier with India, the Chinese state media outlet Global Times reported on a People’s Liberation Army Tibet Military Command night drill “for infiltration exercises behind enemy lines” during which Chinese soldiers “tested their combat capability under a harsh environment.” As a justification for the military drill, Global Times reported that “China and India share borders at the high altitude area, and incidents have recently occurred between the two countries’ troops, and both sides reportedly reinforced deployments.” During the exercise, the report said, “More than 2,000 munitions, including mortar shells, rifle grenades and rockets were fired during the mock battle.”

A second railway project in Tibet, the Sichuan-Tibet railway, is an important part of China’s Belt and Road Initiative that will link China to South Asia as it crosses through Tibet onto Xinjiang. During the NPC session, one Tibetan delegate supported the railway project and asked for it to start at the earliest.

Use of soft power to promote border security in Tibet also came up during the conferences. State media reported NPC delegate Gu Qingyue from the Air Force Engineering University suggesting that China should leverage “educational resources of military academies to help poverty eradication, so as to further enhance stability in border areas.” Gu reportedly has been assisting a school for Tibetan children in Qinghai since 2007.

Chinese state media reported that the TAR delegates to the NPC and CPPCC session submitted nine proposals focused on socio economic infrastructure development and ecological environment protection. Three proposals were on behalf of the delegation. The three were, “Suggestions on supporting operation and maintenance of heating projects in Tibet,” “Suggestions on Supporting the Construction, Operation and Maintenance of Oxygen Supply Projects in High Altitude Areas in Tibet” and “Proposal on Increasing Investment to Support the Construction of the Tibet Desertification Control Project.”

Six proposals were on behalf of individuals, and they include:

State media also said delegates from Qinghai submitted more than 63 proposals, which included suggestions by Tibetan deputies to protect the environment, policies of grazing prohibition and grazing restrictions in the Three Rivers area.

Overall, the two sessions saw the leaders focusing on the completion of building a moderately well-off society this year. In his work report to the CPPCC, Chairman Wang Yang mentioned the commitment to continue developing the western regions, which include all Tibetan areas. As part of this, China’s Ministry of Finance and the State Taxation Administration has announced that starting January 1, 2021, enterprises will pay a lower Corporate Income Tax rate (15 % instead of the standard rate of 25%) for one year if they make investments in encouraged industries in western regions. The NPC was informed that China will establish new pilot free trade zones and integrated bonded areas in the western regions.

On May 9, the Chinese government announced that it had approved the establishment of the Lhasa Comprehensive Bonded Area under the Lhasa Economic and Technological Development Zone. This will support enterprises, including “foreign-invested and foreign trade enterprises targeting South Asian countries such as Nepal and India.”

This year, the NPC also passed the controversial National Security Law on Hong Kong. In his closing remarks to the CPPCC session, Chairman Wang Yang spoke about “Chinese-style democracy” and made a reference to “ethnic groups” saying, “We will continue to effectively organize people and groups from all political parties and ethnic groups to give suggestions to better assist in the country’s governance and collectively work as a whole.”