Law expected to come into force on July 1 in most radical change to semi-autonomous territory since 1997 handover.

China’s President Xi Jinping has signed into law a controversial national security legislation for Hong Kong that Beijing says is necessary to deal with separatism and foreign interference but critics say will outlaw dissent and destroy the autonomy promised when the territory was returned to China in 1997.

Details of the law – which comes in response to last year’s often-violent pro-democracy protests in the city – are due out later on Tuesday.

The legislation will come into effect when it is gazetted in Hong Kong – bypassing the semi-autonomous territory’s own legislature – and is expected to be in force by July 1, the anniversary of the former British territory’s return to Chinese rule.

“We hope the law will serve as a deterrent to prevent people from stirring up trouble,” said Tam Yiu-Chung, Hong Kong’s sole representative on the Standing Committee of the National People’s Congress, which approved the law on Tuesday morning.

“Don’t let Hong Kong be used as a tool to split the country,” he said.

Al Jazeera’s Katrina Yu, reporting from Beijing, noted the passage of the law had been fast-tracked.

“It’s very symbolic that this law has been passed just a day before the anniversary of Hong Kong’s handover from Britain back to mainland China,” she said. “It seems to be Beijing telling the people that at the end of the day it is China that is in charge in Hong Kong and China’s leaders will do whatever they deem necessary to protect Hong Kong.” 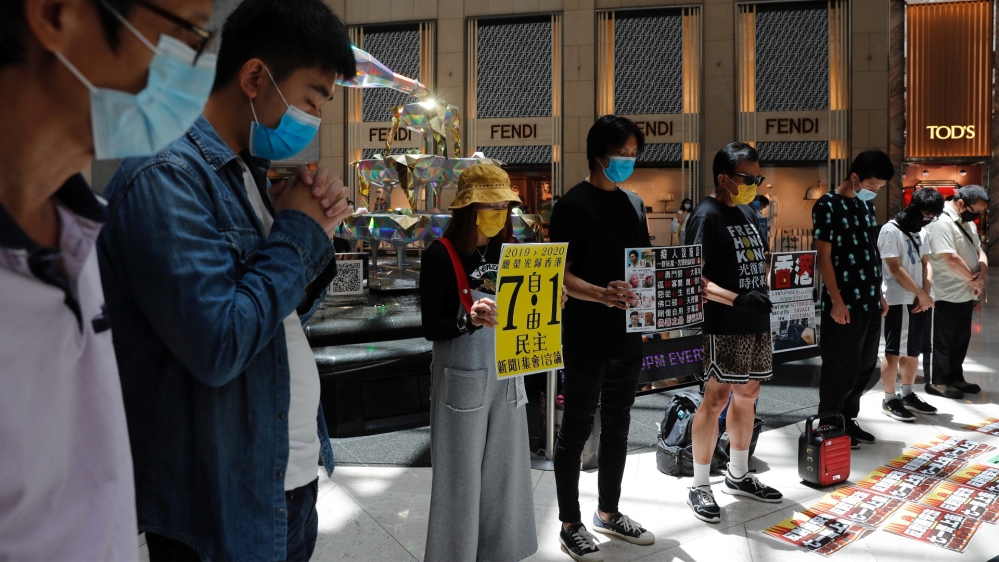 Hong Kong leader Carrie Lam, speaking via video link to the United Nations Human Rights Council in Geneva, said the law would fill a “gaping hole” and would not undermine the territory’s autonomy or its independent judiciary.

Lam said Hong Kong had been “traumatised by escalating violence fanned by external forces” and added: “No central government could turn a blind eye to such threats to sovereignty and national security.”

Authorities in Beijing and Hong Kong have repeatedly said the legislation is aimed at a few “troublemakers” and will not affect rights and freedoms, nor investor interests.

Wong said “worrying about life and safety” has become a real issue and nobody will be able to predict the repercussions of the law, whether it is being extradited to China or facing long jail terms.

The legislation marked “the end of the Hong Kong that the world knew before”, he said, adding: “From now on, Hong Kong enters a new era of reign of terror. With sweeping powers and ill-defined law the city will turn into a secret police state.”

Demosisto then announced on Facebook it was disbanding, saying the loss of top members made it difficult to continue.

China first announced its plan to impose the legislation on the eve of the National People’s Congress last month, after nearly a year of protests in the territory that began over a now-withdrawn extradition bill with the mainland.

The security bill gave renewed momentum to the protests, which had calmed as the coronavirus pandemic made it more difficult to hold mass gatherings, and triggered condemnation from countries including the United States and the United Kingdom.

On Tuesday, more than 100 protesters gathered at a luxury mall in Hong Kong’s Central business district, chanting slogans including “free Hong Kong, revolution now”, with several holding up a flag representing an independent Hong Kong as well as posters condemning the law.

Activists are calling for fresh protests on July 1 even though police have said rallies cannot happen because of the coronavirus. Some 4,000 police are expected to be on standby on Wednesday when an official ceremony also takes place.

Al Jazeera’s Adrian Brown, reporting from Hong Kong, said the mood in the city was sombre.

The passage of the law has “had an immediate and chilling impact. We went out on the streets at lunchtime to speak to ordinary people at lunchtime to try and gauge their opinions and none of them wanted to comment – that’s very unusual here in Hong Kong,” he said.

“People are now going to vote with their feet and leave in droves.”

This month, China’s official Xinhua news agency unveiled some of the law’s provisions, including that it would supersede existing Hong Kong legislation and that interpretation powers belong to China’s parliament’s top committee.

Beijing is expected to set up a national security office in Hong Kong for the first time and could also exercise jurisdiction in certain cases. Judges for security cases are expected to be appointed by the city’s chief executive. Senior judges now allocate rosters up through Hong Kong’s independent judicial system.

It is not known which specific activities are to be made illegal, how precisely they are defined or what punishment they carry.

The South China Morning Post said only a handful of Hong Kong’s delegates to China’s parliament saw the draft before it was approved unanimously by the standing committee’s 162 members earlier on Tuesday. The vote came within 15 minutes of the meeting starting at 9am local time (01:00 GMT), the paper added.

Hu Xijin, the editor-in-chief of the state-run Global Times, said on Twitter that the law’s heaviest penalty was life imprisonment.

The legislation pushes Beijing further along a collision course with the US, the UK and other Western governments, which have said it erodes the high degree of autonomy the city was granted at its handover.

The US, already in dispute with China over trade, the South China Sea and the novel coronavirus, began eliminating Hong Kong’s special status under US law on Monday, halting defence exports and restricting technology access.

Meanwhile, Dominic Raab, the British foreign secretary, called the passing of the law on Tuesday a “grave step”, while Charles Michel, president of the European Union Council, said the bloc “deplores” the decision.

Japan described the move as “regrettable”, while Taiwan’s President Tsai Ing-wen said she was “very disappointed” at the outcome.

And Joshua Rosenzweig, head of Amnesty International China, said Beijing’s “aim is to govern Hong Kong through fear from this point forward”.

China has hit back at the outcry, denouncing “interference” in its internal affairs.