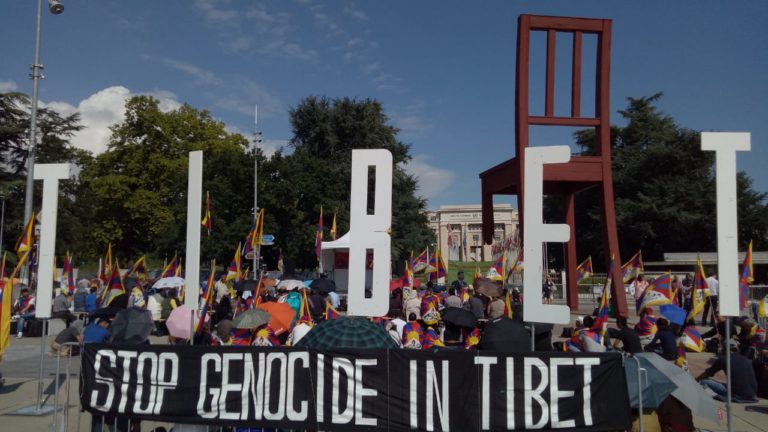 Geneva: The Human Rights Watch released its World Report 2020 with a sharp rebuke on China calling it a “global threat to human rights.” The report paints a grim picture of the territories under Chinese rule including Tibet, East Turkestan (Ch: Xinjiang) and Hong Kong with rampant mass arbitrary detentions, surveillance, indoctrination and destruction of the cultural and religious heritage.

Under the country list of China and Tibet, the report enlists the grim human rights situation in Tibet in 2019. The report highlights the continued “severe restrictions on religious freedom, speech, movement, and assembly” of Tibetans by the Chinese authorities. The report elucidates the abuse of laws by Chinese authorities to wrongfully arrest and torture Tibetans who are lawfully asking for their economic and cultural rights. It cites the example of the two cases of land grabs in Qinghai where nine Tibetans were sentenced for raising their voices against the forceful land grabs by the Chinese authorities.

The report also notes the forceful evictions of Buddhist monks and nuns from Yachen Gar monastery as part of the massive demolition campaign. The expelled monks and nuns are now detained in re-education camps.

The report records the intensification of “sinicization policies” by the Chinese authorities in “Tibet Autonomous Region” under which monastic populations are being subjected to “legal” exams to test their competence in political re-education. The so-called political re-education requires the “senior religious figures to endorse state policies on the selection of the next Dalai Lama.” These restrictions and violations of basic rights of Tibetans have forced 154 Tibetans to self-immolate in Tibet since 2009.

Referring to the report, Representative Chhimey Rigzen, Tibet Bureau Geneva noted that “atheist China has no right to speak on the reincarnation of lamas. The question about the next Dalai Lama will be solely decided by His Holiness the Dalai Lama Himself and by the Tibetan people including Tibetan religious heads from the free world. The use of force by China on religious figures to endorse its policies only goes to prove that China realises it has no say whatsoever on this issue.”

Agreeing to China being a global threat to human rights, Special Appointee for Human Rights based in Tibet Bureau Geneva Thinlay Chukki noted “China has been trying to change the world order including the basic framework of international human rights system. China wants everything with “Chinese characteristics” including human rights. It is time we rise up against China and challenge its intention to dismantle the human rights system shaped after decades of hard-work by people of conscience.”