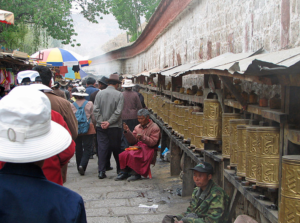 Dharamshala: China stoops another level in carrying out religious persecution of Tibetans. According to the latest report published by Human Rights Watch, an international NGO which conducts research and advocacy on human rights, the Chinese Communist Party has issued a notice banning retired elderly Tibetans from performing the kora and other religious observances.

Kora is a Tibetan Buddhist practice where the devotees circumambulate monasteries or sacred religious sites while reciting prayers. The notice states that the “problem” of retired personnel performing kora openly or semi-openly “is being removed”. It further instructs all city and prefecture Old Cadre Bureaus, and all regional work unit and government personnel departments in the Tibet Autonomous Region (TAR) to “submit a written personnel name list and suggestions for sanctions” before 18 August.

Ironically, in its third Universal Periodic Review before the UN Human Rights Council China had proclaimed to have already implemented the recommendation of member states to guarantee and ensure freedom of religion and belief of Tibetans and other so-called minority groups. The recent news of demolition of nearly half of Yachen Gar, one of the largest Buddhist academies in Tibet on the heels of the destruction of Larung Gar raises questions on the credibility of China’s claims of religious freedom in Tibet.