6th July 2021, Kushinagar: As the well-wishers across the world celebrate with gaiety the 86th birthday of His Holiness the Dalai Lama, Bharat Tibbat Samvad Manch in Kushinagar organized a grand celebration of the auspicious occasion at Namgyal Monastery.

Dr. Shublal Shah, Regional Convener, Bharat Tibbat Samvad Manch, Kushinagar, in his welcome address extended greetings to all the participants including the selected guests while reflecting his joy to organize such a meritorious program at such auspicious pilgrimage site of Buddhists faith where it conjuncts all the other faith also.

Dr. Mamtamani Tripathi, Buddhist Studies, PG College, Kushinagar, being one of the distinguished guest speakers underlined the historical relations between India and Tibet and the role of the Dalai Lama. She touched upon the elementary information in regard to the coining of words ‘Dalai’ and ‘Lama’. With her professional standards, she eloquently presented a composite picture of Tibet’s past, present and possibilities of future.

Sh. Virendranath Tripathi being a notable social activist in the region expressed his greetings. He projected that Tibet’s sovereignty is certain.

Bante Mahendra, President of the International Buddhist Association highlighted the Buddhist values and practices that represent His Holiness that His Holiness represents. He narrated the story of the King that has ordered the execution of a sandalwood merchant that sees the future possibility of the good fortune of sales from sandalwoods that may be used for the pyre of King during his cremation. Meaning the King no matter how hard he may try cannot escape his death that is certain at one point in his life – indicating the mortality of life.

Dr. Sanjay Shukla, President, Bharat Tibbat Samvad Manch highlighted the outreach of BTSM in amplifying the voice of Tibet and its importance for the survival of humanity. He touched upon those facts of the past in terms of accessibility and security between India – Tibet and the Indian pilgrimage to Kailash Mansarovar. He strongly urged the participants to carry forward the message that the issue of Tibet is not only limited to the survival of its identity but more importantly, is linked to the ecological sustenance of entire Asia and particularly South Asia.

Towards the end of the event, Chief Guest Shri Rajnikant Mani Tripathi while expressing his joyous aspirations urged that people of Kushinagar – the place that has huge resemblance for a Buddhist practitioner – have been waiting for a long time with prayers that His Holiness shall grace this land of Mahaparinirvana with his presence in the days to come. The people of Kushinagar shall do everything possible to mark that day into a historic occasion that coming generations will see that for themselves.

Master of Ceremony was performed by Shri Suresh Pratap Gupt as the program was co-hosted with Namgyal Monastery, Kushinagar that saw a huge gathering while adhering to all the norms of social distance keeping in view of existing remnants of the pandemic. Followed by this, there was a Tree Plantation ceremony that was graced by Honorable MLA of Kushinagar. 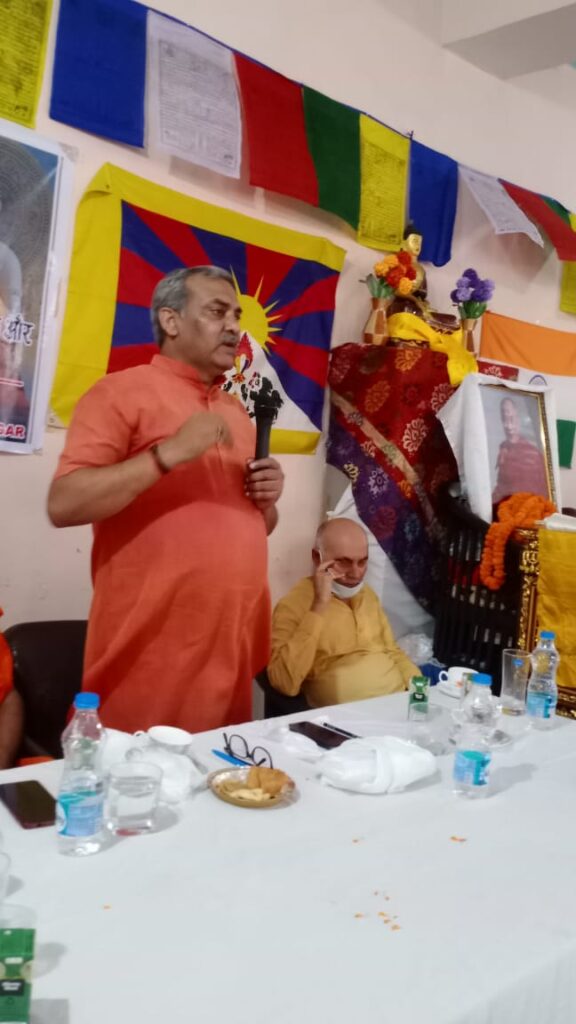