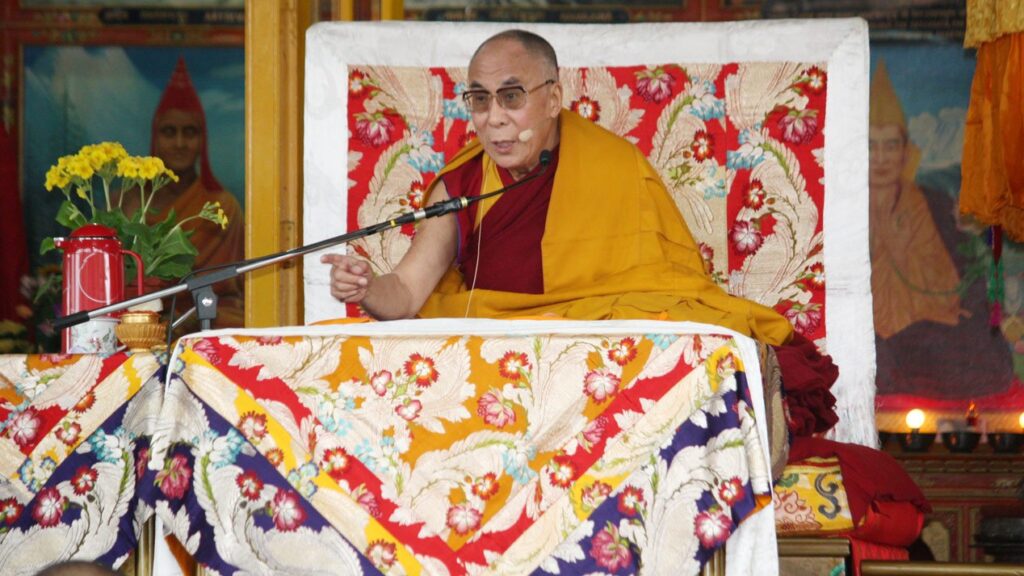 His Holiness the Dalai Lama making the first official remark on his retirement from political responsibilities during a public teaching at Tsuglagkhang, Dharamshala, 19 March 2011.

“Even prior to my departure from Tibet in March 1959, I had come to the conclusion that in the changing circumstances of the modern world the system of governance in Tibet must be so modified and amended as to allow the elected representatives of the people to play a more effective role in guiding and shaping the social and economic policies of the state. I also firmly believed that this could only be done through democratic institutions based on social and economic justice.” His Holiness the Dalai Lama, Foreword to the Constitution for Tibet, drafted in 1963.

There are countless reasons to honour and thank His Holiness the Dalai Lama, but one of the most outstanding among them is his gift of democracy. First established in the year 1960, the Tibetan system of democracy as viewed and affirmed by the Tibetans was a governmental system envisioned and singlehandedly built by His Holiness the Dalai Lama. Ever since then for the last 60 years, the Central Tibetan Administration, formerly known as the Tibetan Government in Exile has evolved and thrived in leaps and bounds.

For the first time in the history of refugees worldwide, a small exiled population faced with a multitude of insurmountable atrocities from the invasion of its homeland and the systematic crackdown on its people and identity was able to develop a thriving participatory democracy that is well intact with its cultural roots.

This success story of the Tibetan democracy in exile is a tribute to His Holiness the Dalai Lama’s twin vision of democratizing the exile community to protect its cultural identity and of laying democratic foundations for a future, free Tibet.

Less than a year after coming to exile, His Holiness made it clear that the Tibetan system unlike in the past, should be democratic, where religion and polity would coexist in perfect harmony. Thus, on 2 September 1960, the first elected representatives of the Tibetan Parliament-in-Exile (then known as the Commission of Tibetan People’s Deputies) took their great oaths and inaugurated the Tibetan democratic system.

The Tibetans under the guidance of His Holiness the Dalai Lama took a major stride to democracy when it elected its first female representatives to the parliament, the highest lawmaking body. This was followed by the inclusion of Bon representatives. One of His Holiness’ core concerns during the initial period was to have a Tibetan government adaptable with the modern times and as such, the Charter of the Tibetan People in Exile was adopted, the supreme law governing the functions of the CTA. With the full-fledged Tibetan parliament-in-exile and the Kashag (Cabinet), and the Tibetan Supreme Justice Commission set up the following year, the three pillars of democracy were then completed.

The democratisation of the Tibetans in exile further evolved when His Holiness declared his status as semi-retired and called for the first direct election of the Kalon Tripa, the executive head of the Central Tibetan Administration.

In what was a culmination of more than fifty years of unceasing efforts in overseeing the Tibetan polity into a true democracy, His Holiness took the final step towards complete democratization of Tibetan exiles, and relinquished political authority to the democratically elected Sikyong (formerly called the Kalon Tripa). He said in the iconic 2011 speech, “The rule by kings and religious figures is outdated. We have to follow the trend of the free world which is that of democracy.”

At a time when people were putting their lives on the line for democracy during the Jasmine Revolution, with leaders shedding blood to hold on to power, His Holiness the Dalai Lama devolved all his political power to democratically elected Tibetan leaders, rejecting the thousands of impassioned petitions by the Tibetans inside Tibet and worldwide.

The Sikyong-led CTA today functions with all the attributes of a free democratic administration, including the three pillars of legislative, executive and judiciary as well as the autonomous bodies. Having fully committed to the path of the democratic system, Tibetans in exile and around the world are once again bracing for the general election 2021 where they will be electing a new Sikyong and Members of the Tibetan Parliament.

The global recognition that the young Tibetan democracy continues to draw from around the world stands to manifest the immediate and ultimate vision of His Holiness for the Tibetans in exile and for future Tibet.

In the most remarkable tribute to His Holiness’ democratic achievements, US President Donald Trump signed the Tibetan Policy and Support Act of 2020 into law this month. The Act commended His Holiness the Dalai Lama “for his decision to devolve political authority to elected leaders in accordance with democratic principles” and further, formally acknowledged the CTA as the legitimate institution reflecting the aspirations of the Tibetan diaspora around the world and the Sikyong as the President of the CTA.

In the 1992 Guidelines for Future Tibet’s Polity and Basic Features of Its Constitution, His Holiness said: ‘If Tibet is to survive as an equal member of the modern international community, it should reflect the collective potential of all its citizens, and not rely on one individual. In other words, people must be actively involved in charting their own political and social destiny’. The US recognition of untiring efforts and farsightedness of His Holiness the Dalai Lama in overseeing the Tibetan polity into a true democracy in exile serves to remind those in authoritarian China the merits of His Holiness’ vision of a future democratic Tibet.