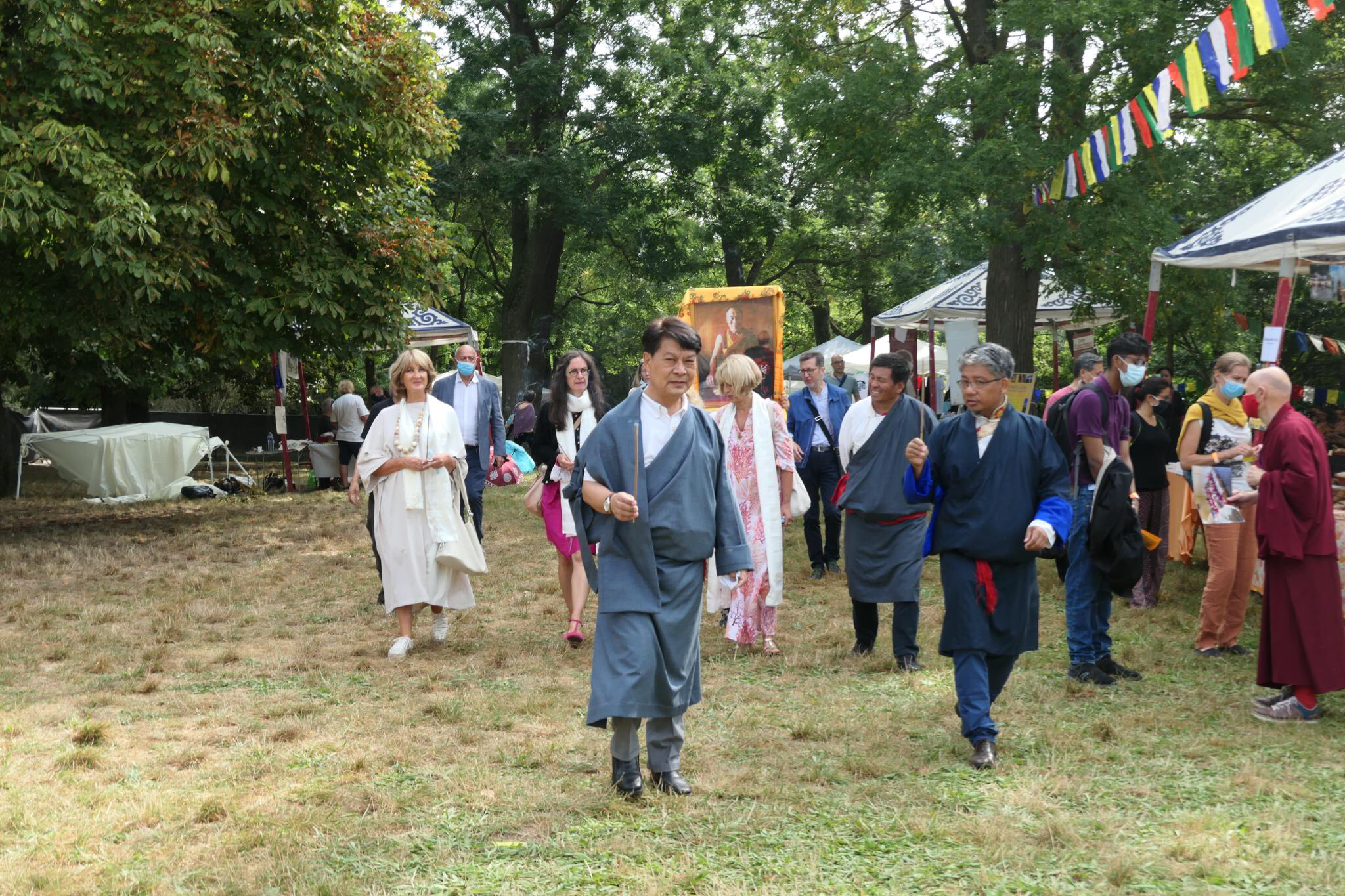 The 20th edition of the Himalayan Festival in Paris was inaugurated in the presence of Mayor Ms Emmanuelle Pierre-Marie of Paris 12 and MP Mrs Elizabeth Toutut-Picard on the morning of 4th September. Madam Peirre-Marie was accompanied by Ms Genevieve Garrigos, Municipal Councillor, and Madam Toutut-Picard by her husband. They were received at the gate by Representative Tashi Phuntsok and Secretary Namgyal Samdup of Bureau du Tibet.

The formal ceremony began with the procession accompanied by the portrait of His Holiness the Dalai Lama and later it was installed at the main stage. Led by Representative Phuntsok all the guests offered Mendrel to His Holiness. It was followed by brief purification prayers led by Ven. Tenzin Penpa.

Recalling his association with the Festival since 2000 Representative Phuntsok expressed hearty gratitude for the French support for Tibet and his deep admiration for French culture, French language, and indeed French cuisine. Over the years the Festival has become one of the important calendar events of Paris and especially of the Bois des Vincenne in Paris 12, of which Ms Pierre-Marie is the mayor. He thanked all those who have been involved with its success all those years, including Tibetan community leaders (Mr Thupten Gyatso, and Ven. Tenzin Penpa, former Presidents of Tibetan Community, and Mr Karma Thinlay current President of Tibetan Community), volunteers, and of course his colleagues Mr Namgyal Samdup, Mr Lekshey and Mr Jigme Dorjee.

Mayor Pierre-Marie made a strong and emphatic speech in support of the cause of Tibet. She said that the cause of Tibet is a just cause and that she would support it fully. She said that Tibetans would have to persevere and that justice would prevail. As a committed environmentalist, who came to the site on her bicycle, she said the Tibetan plateau is an important environmental heritage.

Madam Toutut Picard reflected on her association with Tibet over the years and her visit to Tibet 15 years ago. As the President of Tibet Support Group in the National Assembly of France she reiterated her commitment and solidarity for Tibet. She had an audience with His Holiness in 2018 in Rotterdam in the Netherlands. She also chaired the drafting committee of the Declaration of 7th World Parliamentary Convention on Tibet in Riga, Latvia in 2019.

Concluding the inaugural address Ms Garrigos pointed out that the issue of Tibet is an important human right matter. As former President of Amnesty International, France she warned against duplicity of Chinese narratives. As Deputy Mayor Jean-Luc Romerio-Michel, committed to human rights, was unavailable for the occasion, she said he was present in spirit in support of Tibet. (He attended the Tibetan Democracy Day celebration on September 2 with Ms Garrigos.)

The Festival will go on until Sunday night of September 5. The whole gamut of Tibetan culture, dance, discussion, mandala crafting, films, Tibetan handicrafts and food will be available for the attendees to enjoy and savour. Several associations, Buddhist Centres and restaurateurs are on the site to present their portfolios at the Festival.

The Festival is organised by Maison du Tibet and Bureau du Tibet. The Tibetan Community in France lends tremendous support in the Festival. All cultural shows are arranged by it. Its President Mr Karma Thinlay is doing a wonderful job as compere of the events on the stage.

Tomorrow’s major attraction will be a discussion with Mr Pierre-Antioine Donnet, a scholar, journalist and former Editor-in-Chief of the Agence France-Presse (AFP). The Taiwanese Representative and Representative Phuntsok will be other panelists. 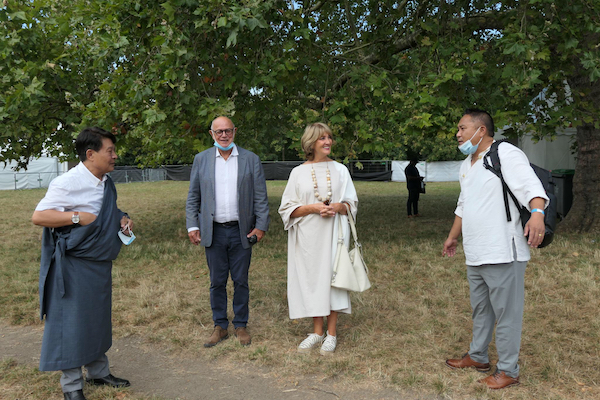 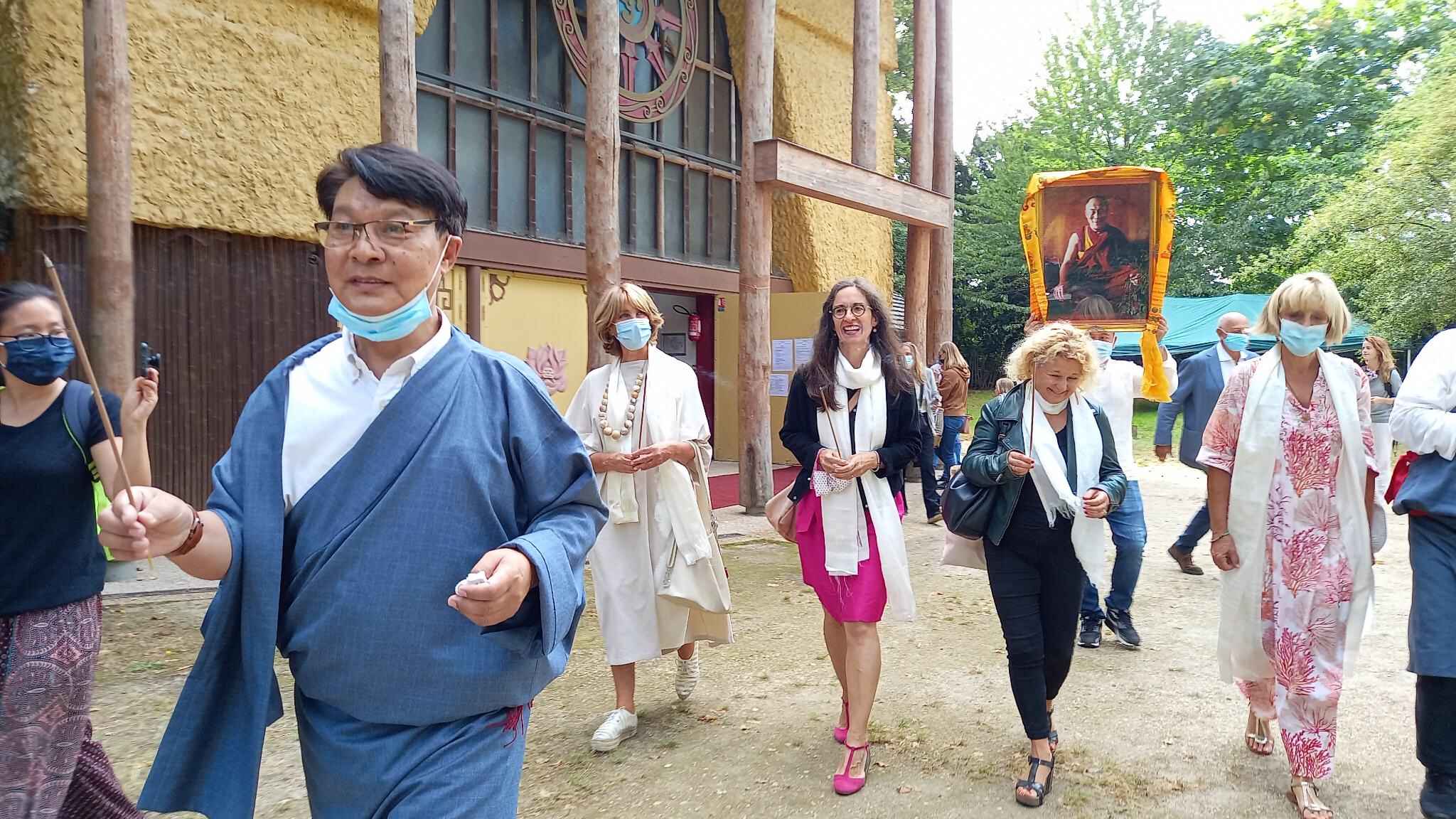 Guests leading the procession with His Holiness’ portrait. 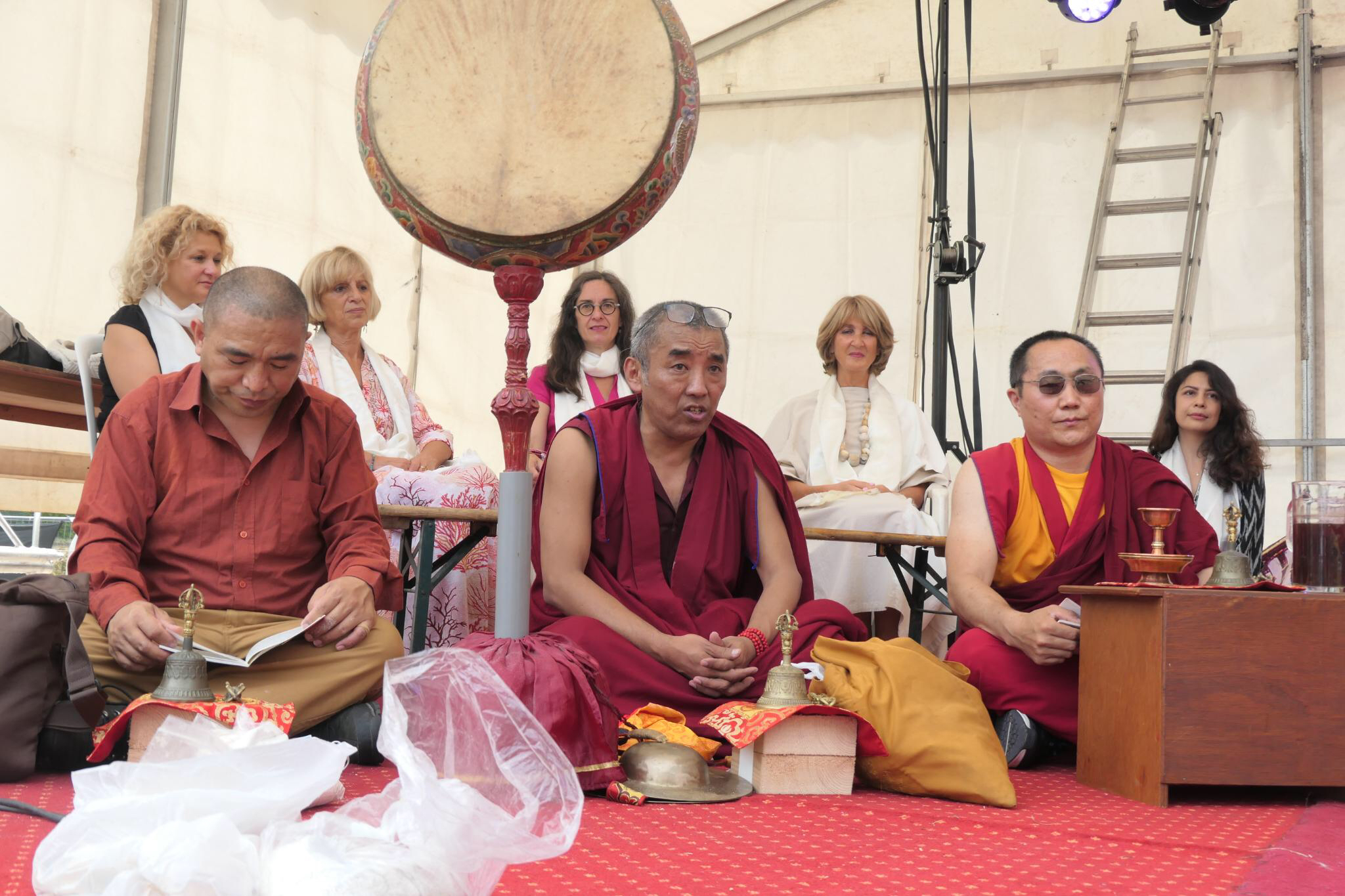 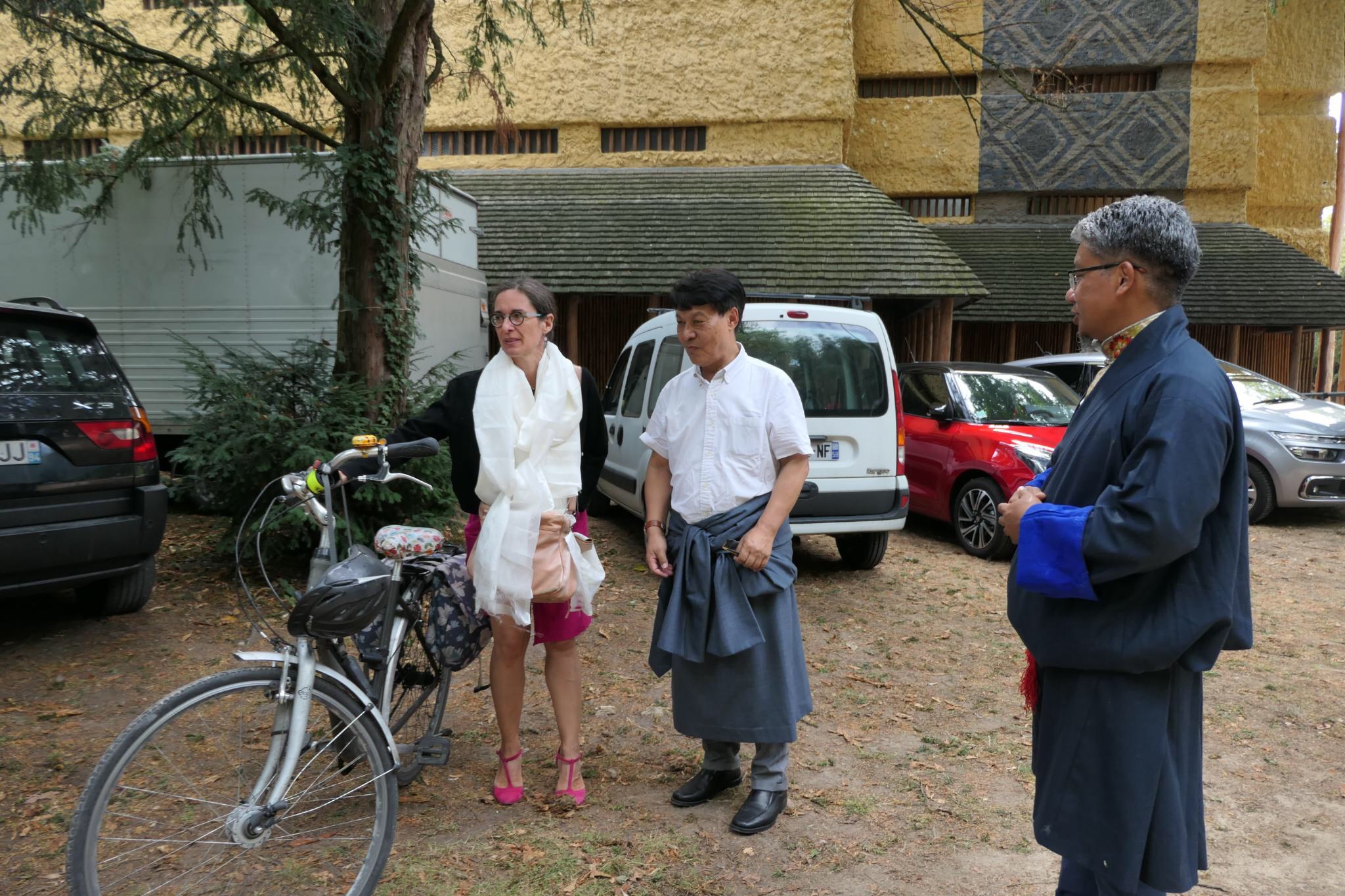 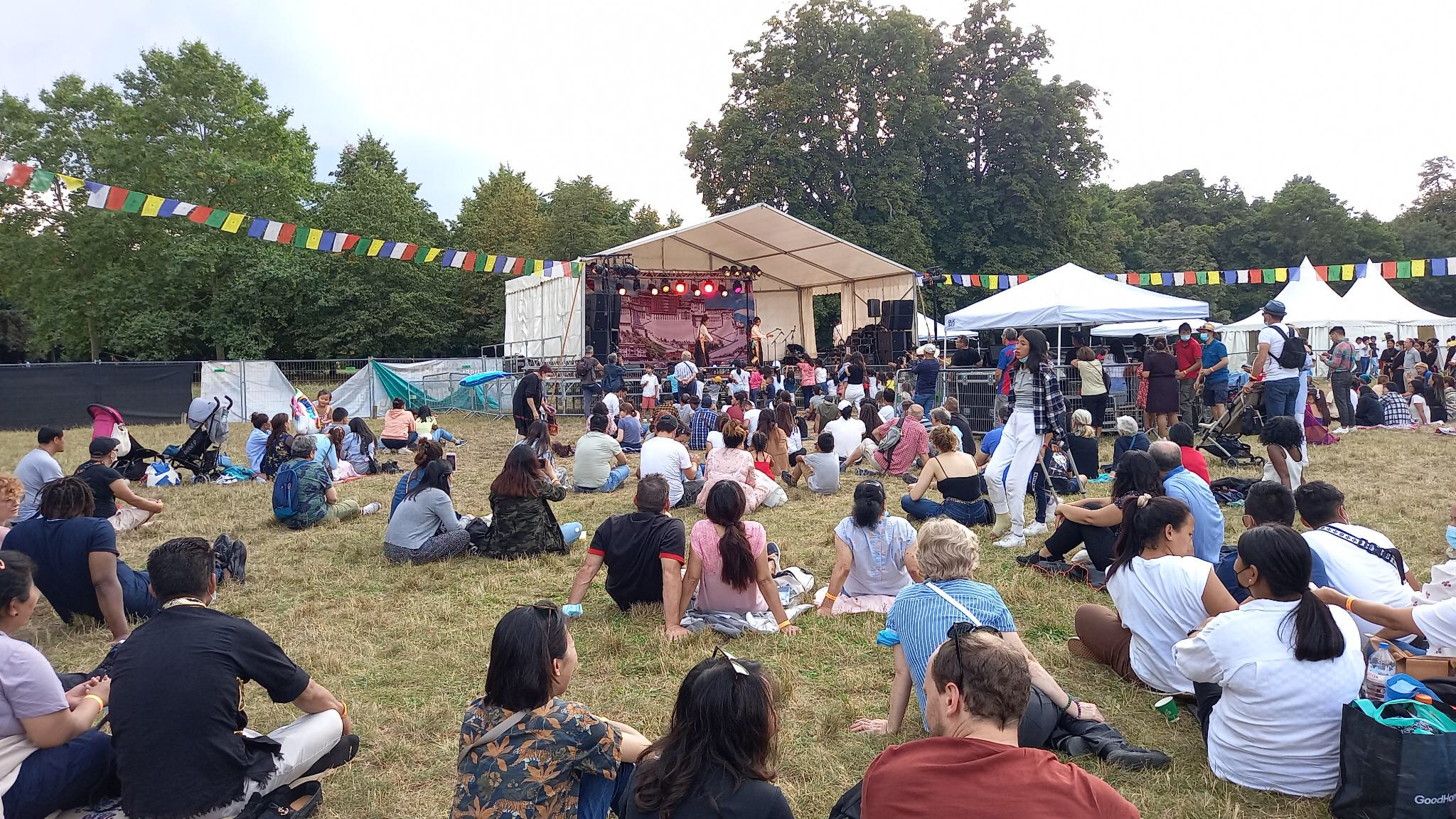 Another section of crowd 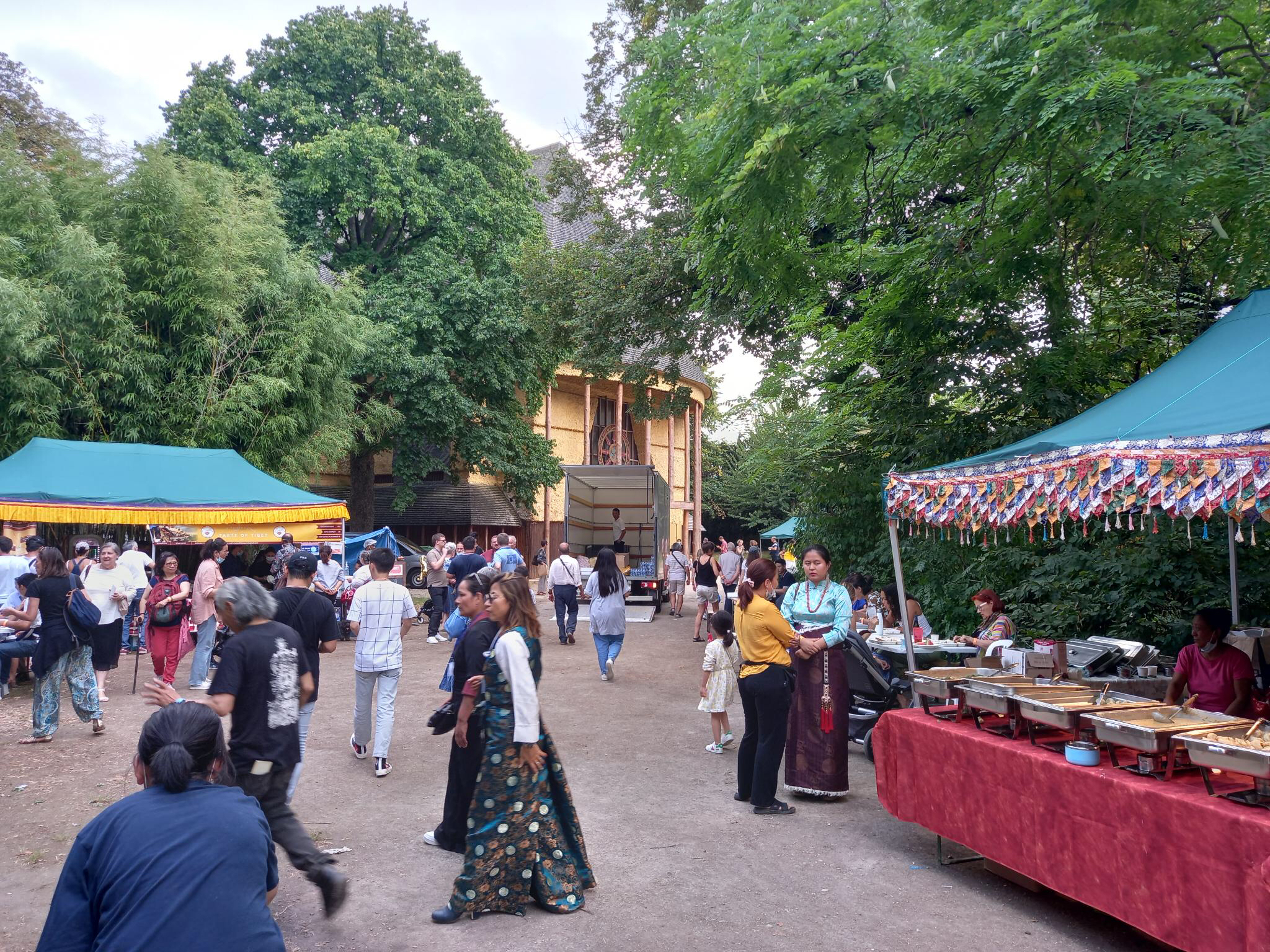 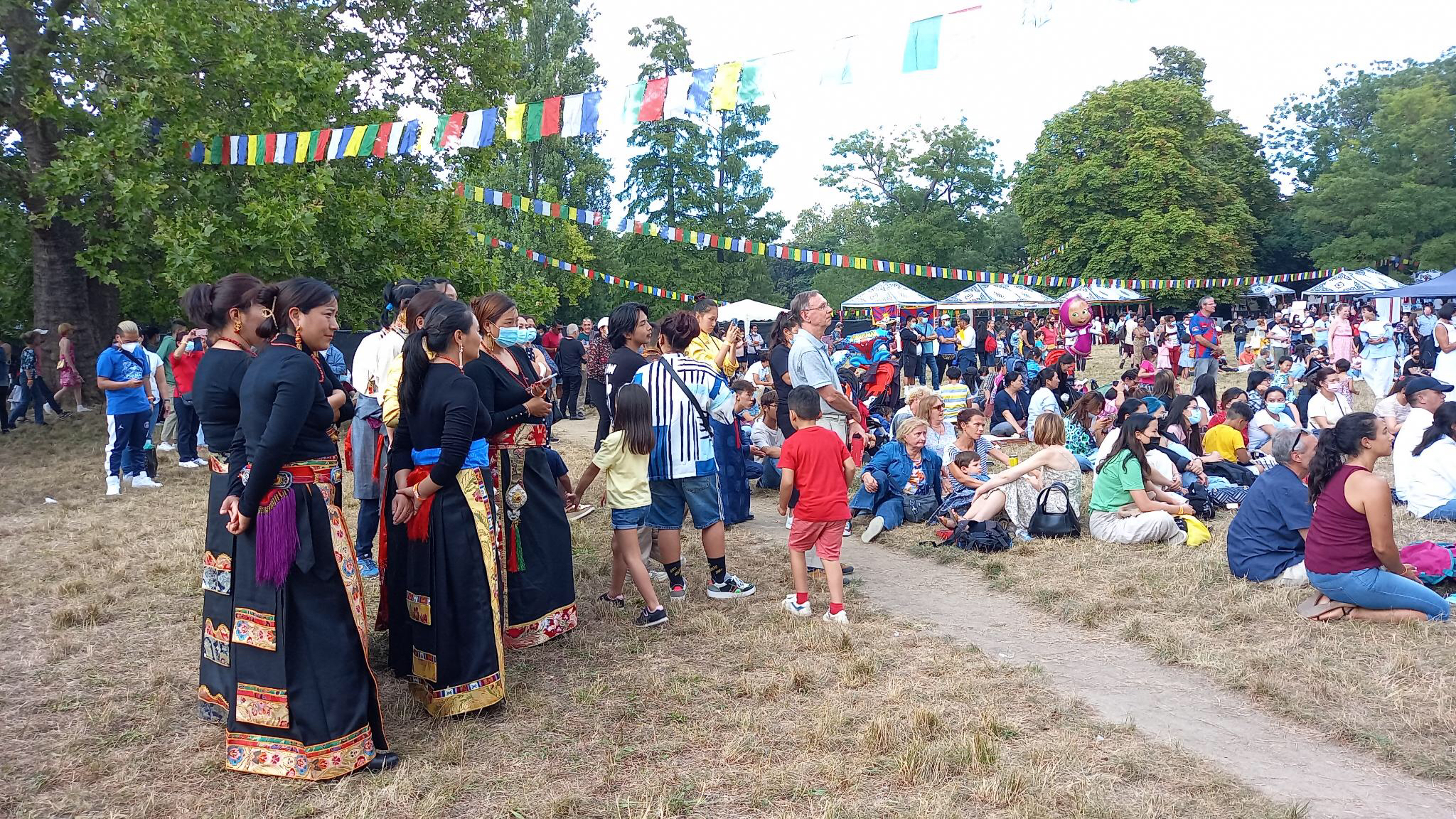 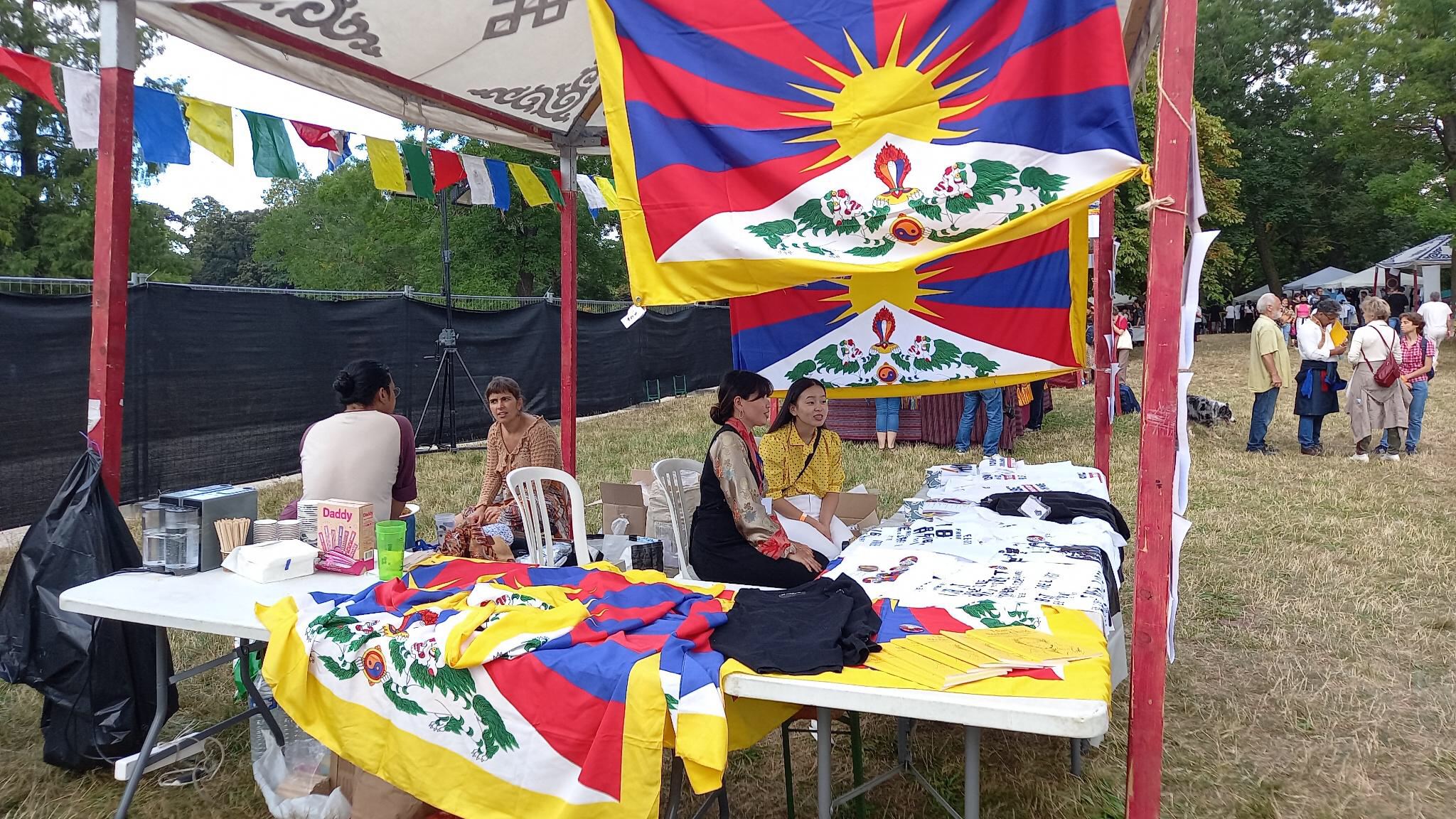